Skip to content
Review: Jacob Jonas The Company at the Wallis Annenberg Center for the Performing Arts

Jacob Jonas The Company culminated its 2018/2019 Season Company-in-Residence at the Wallis Annenberg Center for the Performing Arts with a program that introduced two world premieres and reprised two repertory works that expressed a range of choreographic style from the sublimely abstract to the narrative-driven social issue polemical. 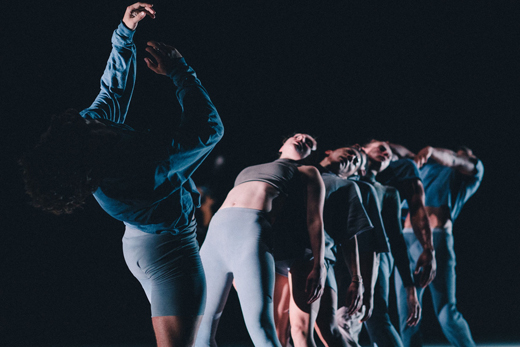 “Crash,” photo courtesy of The Wallis

The evening began with the intensely captivating “Crash” that draws attention to the performers’ highly skilled talents that seamlessly integrate ballet-like subtlety with acrobatic tumbling and dynamic break dance moves. We hear the sound of ocean waves, as the dancers, on the floor and lit by a single ray of light, simulate the ebb and flow of the tides configuring as one, then two, then four, and then seven and then develops into solos, duets and interconnected groups. Afro-pop singer and songwriter Okaidja Afroso’s original score and live performance begins with lyrical guitar and spoken word and builds into vibrant beat box rhythms that thrust the dancers into multiple crescendos. Eventually the dancers fall to the floor depleted and the soothing sounds of guitar gives rise to a final undulating duet afterglow.

After a pause, the mood shifts with “In the Dollar.” As dancers dressed in black move austerely within a white light, we hear Elizabeth Warren’s Equal Day April 2016 speech. We are reminded that the day represents not a celebration, but rather an acknowledgement that it takes women over three months of doing the same work as men to begin to be compensated equally.

Another pause, and we treated to experience the poignant premiere of “viceversa,” a duet choreographed by and featuring 62-year old internationally acclaimed Daniel Ezralow and the 28-year old Jacob Jonas. Both men in dressed in black begin with an embrace and them move into jostling back and forth. Jonas, expression-less, works hard running and around and twitching while Erzalow, with what seems like a perpetual smile, stays centered and gestures more effortlessly as they fight, play and support each other, and with a final embrace separate into their own space. 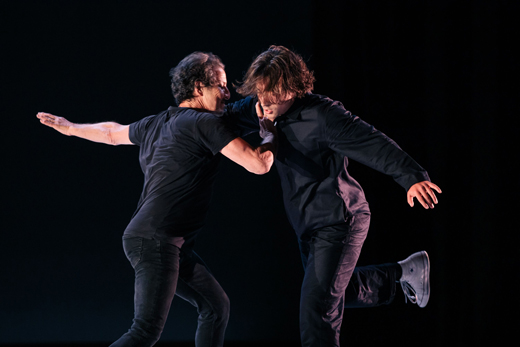 “viceversa,” photo courtesy of The Wallis

After an intermission and concluding the show, Jonas offers up the world-premiere of There’s Been a Study, inspired by the work of educational consultant Sir Ken Robinson, author of You, Your Child, and School: Navigating Your Way to the Best Education, presents the case of how the educational system curtails student creativity.

The piece begins with a video montage of elementary school age children telling us what they “want to be when they grow up” as eight dancers in pastel color costumes sit at clean new school desks with their arms raised apparently waiting to be called on. It then proceeded with a recitation of critical points affecting a student’s development including “lack of autonomy or control,” “inauthentic learning,” and “no room for passions or interests.” Set into motion by the blaringly loud electronic score created and played live by Nicole Miglis, which at times was a bit much for my older generation ears, the dancers’ respond with harshly robotic in unison movements and repeat their raised arms gesture. After awhile, the dancers soften, yield to one another as individual personas emerge. Featured in this work is Georgia Bryan, an intern with the Company and a high school freshman at Crossroads School for Arts and Sciences, who narratives the message while doing a contortion solo. 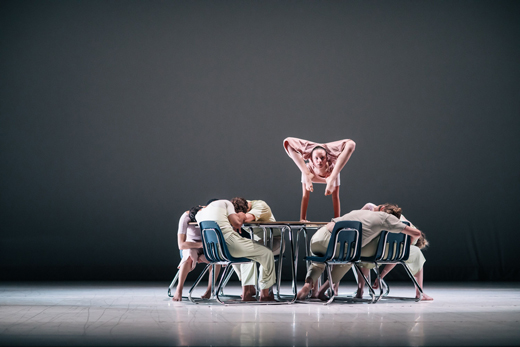 “There’s Been a Study,” photo courtesy of The Wallis

For more about Jacob Jonas The Company, go to jacobjonas.com For more information about The Wallis, please visit: TheWallis.org