Skip to content
Review: Jacob Jonas The Company at the Wallis Annenberg Center for the Performing Arts!

Jacob Jonas The Company at the Wallis Annenberg Center for the Performing Arts Bram Goldsmith Theater In Beverly Hills – January 13, 2017
by Michael Baroff

The youthful, energetic, and highly skilled Jacob Jonas The Company delighted the audience with an evening of four dance works including two world premieres at the Wallis Annenberg Center for the Performing Arts.  This wonderful venue celebrates the classic and the modern as it is the restored original 1933 Beverly Hills Post Office now housing the 150-seat Lovelace Studio Theater and the contemporary 500-seat, state-of-the-art Bram Goldsmith Theater. 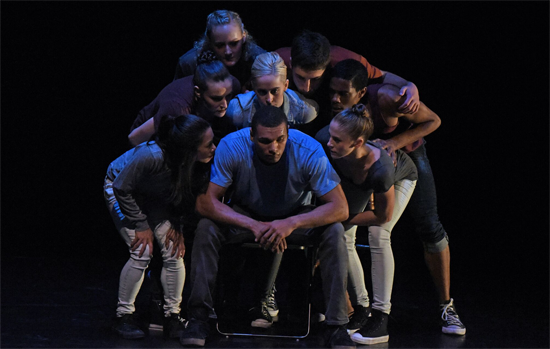 Photo by Kevin Parry for The Wallis

The first work on the program, In a Room on Broad St., is an extended multi-scenario piece inspired by Jonas’ ideas about how society views competition. During 30 minutes, the nine performers, wearing street clothes, move through the bare space pushing, pulling, configured as a mob, as small groups, pairs and individuals and maneuvering on and and around folding chairs in often enigmatic tableaus. Most striking about the piece, and the company itself, is the integration and synergy of the unique skills of the individual performers that  blends modern dance, ballet, hip-hop, gymnastics, acrobatics, partnering, parkour, and cyber-yoga.

After a brief interlude, the first half of the show included the premier performance of f l y, which references the Swedish word for escape, that Jonas describes as being birthed through watching a heartbeat monitor as it flat-lined and which explores the themes of endurance and deceleration where the dancers move on and off across the stage in a series of formulaic repetitive and seemingly erratic gestures,

After the intermission, we were shown Grey, also a premier, a large screen video presentation featuring five dancers moving through the marble walled environment of the J Paul Getty Museum to original music by Chris Westlake and for which cinematographer William Adasheck captured striking close-ups and overhead shots

The last work, Obstacles, to the music of Phillip Glass, featured a duo between Jonas and Marissa Labog, who choreographed the piece with Jonas through an improvisational process.  The work was inspired by Jonas’ friend Mallory Smith who provided a voice over narration of her experience and  perseverance overcoming a life-long health challenge 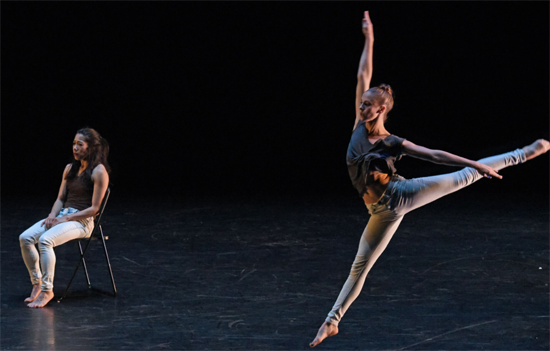 Photo by Kevin Parry for The Wallis

At the end of the performance, Paul Crewes Wallis Artistic Director, was joined on stage by Jonas and the company for a conversation with the audience. Jonas, who is 24 and a graduate of Beverly Hills High School, talked of his early beginnings doing street performances in Venice and current desire to bring dance to a wider audience to through social media. The conversation highlighted the group’s ability to portray raw emotion and connect with each other through sharing energy. Members of Los Angeles-based troupe are Jill Wilson, who is also company manager; Anibal Sandoval, with a background in break dancing and martial arts; Brooklyn Reeves, a graduate of Chapman University; Charisa Kroeger, graduate of Loyola Marymount; Jacob “Kujo” Lyons, with 20 years experience on the global b-boy/break-dance scene; Jeremy Julian Grandberry, trained as a member of the NYC Joffrey Ballet School’s touring company; Kimberly Bridgewater, graduate of University California Irvine; Lamonte “Tales” Goode, showcases a fusion-style of gravity-defying balance and dance moves; Marissa Labog, dancer, actor and stuntwoman; Nic Walton, acrobat, free runner and parkour; Renee Stewart, graduate of London Contemporary Dance School; William Adasek, lighting designer and cinematographer.  http://jacobjonas.com