Celebrating its 40th Anniversary Season, Hubbard Street Dance Chicago presented a musically driven two part show at the Wallis Annenberg Center for the Performing Arts. In the first half, Third Coast Percussion, the Grammy award winning quartet of classically trained percussionists, held the stage performing original compositions by British singer/songwriter/composer Devonté Hynes. The evening began with an energetically transcendental musical prelude, “Perfectly Voiceless” that sounded reminiscent of the work of Phillip Glass, with whom both Third Coast Percussion and Hynes have worked, and during which the musicians moved around the stage to re-configure amongst themselves to perform on the various idiophone and drum set-ups.

The following two dance pieces were noted to be influenced by Sylvia Plath’s poem “Mushrooms” that explores how the oppressed, especially women, will quietly rise up. “For All Its Fury,” choreographed by Emma Portner, begins with a thunderous boom as abstractly painted banners drop down to the stage to create barriers around which the dancers, in brown tunics, maneuver in a sense of primordial struggle as featured soloist Rena Butler, in a speckled lizard-like outfit, holds forth on her own. 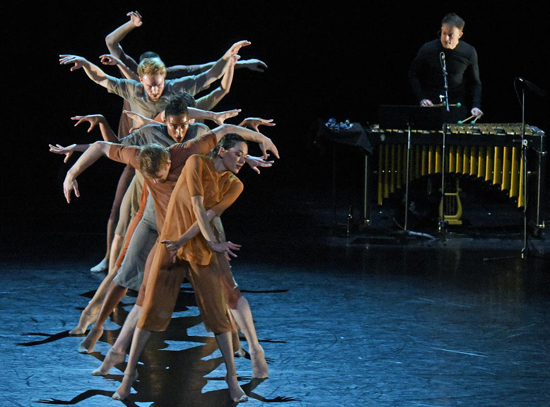 Hubbard Street Dance Chicago in For All Its Fury by Emma Portner on January 10, 2019, at the Wallis Annenberg Center for the Performing Arts; Photo by Kevin Parry

“Everything Must Go,” choreographed by Teddy Forance, continued the theme of ecological sustainability as dancers configured together in unison to the sounds of chimes and beat of drums. Both of these choreographers brought their pop-culture sensibilities to the works that accentuated the physicality of the dancers.

After an intermission, the music and performances changed tone, first with “Ignore” (excerpt from Decadance/Chicago) choreographed by Ohad Naharin. With music by Arvo Pärt, five female dancers initially strike individual poses that expand into sequences of repetitive movements reflecting the words from the poem “making it” by Charles Bukowski as spoken by Bobbie Jene Smith. The poem begins “ignore all possible concepts and possibilities” and continues with each subsequent line reiterated to offer increasing ribald behavioral admonishments.

“Pacopepepluto” by Hubbard resident choreographer Alejandro Cerrudo presents three male dancers, stripped down to their flesh colored jockstrap supports, frolicking with whimsy and strength in solo dances to songs sung by the “king of cool” Dean Martin that he made popular in the 1950’s and ’60’s. 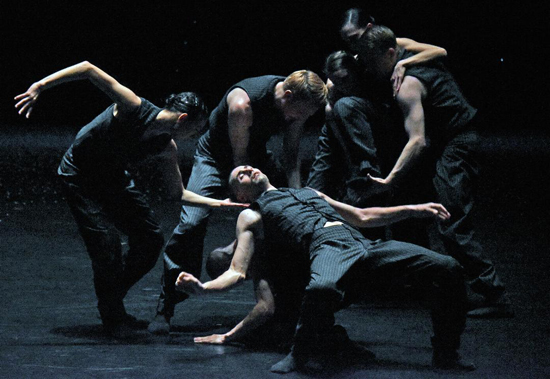 Hubbard Street Dance Chicago in Solo Echo by Crystal Pite on January 10, 2019, at the Wallis Annenberg Center for the Performing Arts; Photo by Kevin Parry

Completing the evening was “Solo Echo” choreographed by Crystal Pite to two cello and piano sonatas by Johannes Brahms and inspired by the poem “Lines for Winter” by Mark Strand. The seven dancers moved together in lyrical waves configured at times in a single line with individuals dropping off to the floor as well in tightly knit clusters moving through subtlety lit shadows in front of a projected back drop of helix shaped light emulating falling snow.