Skip to content
Review: Circa: Humans at The Wallis Annenberg Center for the Performing Arts

CIRCA CONTEMPORARY CIRCUS, under the direction of visionary Yaron Lifschitz, made its Southern California professional stage debut at the Wallis with its newest work, “Humans.” The Australian troupe integrates acrobatic movement, dance, theatre and circus and has toured the world since 2004 with over 50 highly acclaimed shows. 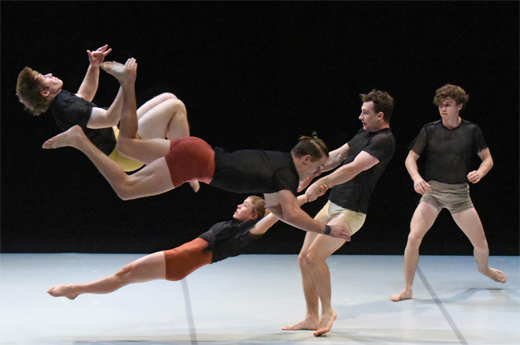 All photos by Kevin Parry

I had the sense that many in the audience didn’t know to expect, but clearly and quickly became totally enthralled during the 70-minute performance. Before the house lights went down, performers entered the stage, which was fitted with a gymnastics mat, and slowly removed their outer clothes, placing them in a pile, picking up the pile, and then walking off stage. As the lights dimmed we notice that was one pile remained. Suddenly the clothes, one garment at a time, were flung up in the air, revealing a single performer. The mood was set for us to expect an evening full of surprise.

The flow of the performance had the feel of a contemporary dance performance with disctinct scenarios each accompanied by a range of musical styles including blues, classical, world, and electronica. However, there was no reference in the program to the designation of scenes or even of the titles of the musical selections. We watched moment to moment to what was happening and anticipate what would happen with only the context of “Humans.” 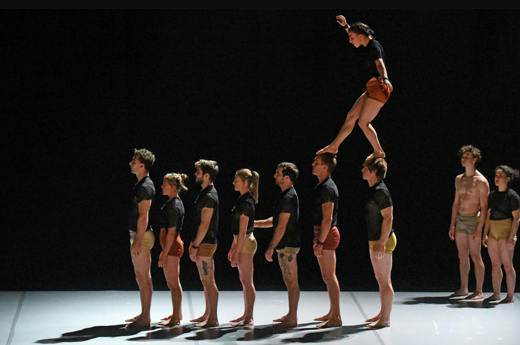 The 10-members of Circa demonstrated, to our oohs and ahs, the extremes to which the human body can move, contort, and balance with flexibility and strength. The unique capability of each individual was highlighted as well as together when they supported each other forming human structures. We witnessed acrobatic solos, duets and group floor work, which might be viewed as extreme yoga, contract and trust maneuvers, as well as the skill to climb and twirl on trapeze, rope and straps. With the fast pace tumbling over each other, climbing onto and walking atop each other, I wondered whether the essential aspect of the choreography was to ensure the safety of the performers with conveying any particular message being secondary. With that said, in a few of the vignettes, there were demonstrations of intimacy, as when performers whimsically licked their and other’s upper arms to the song lyrics “can’t smile without you”, when a female stomped on a male to the sounds of “please”, and especially, when at times, performers tenderly caressed a theatrically “wounded” or “exhausted” comrade. 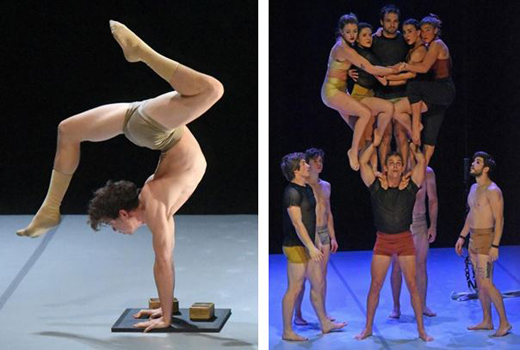 In “Humans” we awed at and applauded the capacity of physical virtuosity and expression of, dare I say, the youthful body – and, for the audience, we took away more the metaphor for the human ability to strive to overcome physical and emotional challenges with, perhaps, an inner strength.

For more about Circa, go to www.circa.org.au; For upcoming performances at The Wallis, go to www.thewallis.org