In 2017, Bill T. Jones removed the word “dance” from the name of the company he founded with Arnie Zane in 1983. As he now says, “We’re a contemporary performance ensemble.” It is with this subtle, yet meaningful, frame of reference to have experienced Analogy Trilogy presented by the Center for the Art of Performance UCLA.

Analogy Trilogy is comprised of three separate yet thematically linked pieces — Analogy/Dora: Tramontane, Analogy/Lance: Pretty aka The Escape Artist and Analogy/Ambros: The Emigrant. Each work is an “oral history” of the main character developed through interviews conducted by Jones in the case of Dora Amelan and Lance Briggs and extracted from the character Ambros Adelworth from novella Emigrants by W.G. Sebold.

The works, individually and together, are a creative assemblage driven by the scripted narrative stories that the performers act out, sing and speak the words of the characters in tableau scenes. It is with grace and fluidity that the performance switch roles (and hand off microphones) amongst themselves while moving and dancing in often solo, duet and group “phrases” and scenes while also shifting panels that form walls, rooms, windows and constructing and dismantling a reoccurring metal framed structure.

The power and, almost operatic, feel of the works is highlighted by the live music performed by Emily Manzo, pianist, Mathew Gamble, baritone, and Nick Hallett who plays multiple instruments and beautifully sings excepts from Franz Schubert’s “Nachtstuck,” “Alinade.” and “Nahe des Geliebten” that weaves through each piece along with a soundscape score comprised of musical excerpts from 50s and 60s classic pop music, rhythm and blues, and the club music from the 80s and 90s. 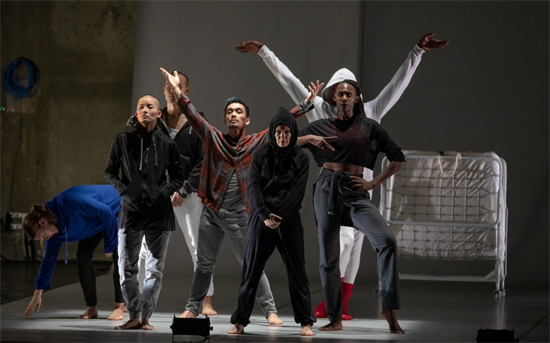 Analogy Trilogy is most certainly a very personal endeavor from Bill T. Jones. Analogy/Dora: Tramantane reveals the memories of Dora, a French-Jewish Holocaust survivor through episodes that depict her early life in Belgium, her mother’s death, and her work as a nurse and social worker in an underground Jewish organization in Vichy France. Dora, who is alive today, is Jones’ mother-in-law, the mother of his spouse Bjorn Amelan who has collaborated with Jones for 25 years. Analogy/Lance: Pretty aka The Escape Artist is derived from conversations Jones had with his nephew Lance T. Briggs, a young African-American dancer in New York who battled his demons with drug use and worked in the sex trade in the 1980s and ’90s. and acquired the name “pretty boy-gangster thug,” while in prison. Analogy/Ambros: The Emigrant, though not about a real person, similarly brings forth the exploration of the nature of trauma, memory within one’s conscious and unconscious psyche. This story, which first inspired Jones to develop the Analogy Trilogy, tells of a German valet/manservant who serves as companion to a privileged, dissipated, young scion of a wealthy Jewish family.

Adding to the multi-dimensional creative production elements is the use of full stage video projections of the dancers in motion, in their own “selfies” reflecting on their personal take on the Emigrant tale, and the appearance of the open “revolving cage” representing the abstract concept of “looking for something that is not there.” Jones has always been engaged in social issues and certainly in this production he explores the human dilemmas of how to live a life while grappling with trauma, being a stigmatized minority and a refugee – issues that are prescient today. Jones offers to us the philosophical questions – What is the effect of trauma? What role does memory play in it? And how can narrative and movement work together to bring a person, or character, to life? When asked specifically about his choreographic process Jones deferred, but reflected that “art happens when something is pushed against” and that “one is not really an artist until you take the next step to make it beautiful,” though he quickly edited himself to say “not even sure it has to be beautiful.”

For more about the Bill T. Jones/Arnie Zane Company, go to https://newyorklivearts.org/btj-az-company/
For upcoming performances at UCLA Center for the Art of Performance, go to https://cap.ucla.edu/