Hershey Felder gives a brilliant performance! I first had the extreme pleasure of seeing Felder at the Geffen back in 2006 when he performed in and wrote George Gershwin Alone. This was my first introduction to Hershey Felder and I loved his performance as well as the direction by Joel Zwick who also brilliantly directed this production. Through the years the two have collaborated in other intimate portraits of Mozart, Bernstein and Chopin. Beethoven is also written by Felder.

Photo by Christopher Ash; courtesy of The Wallis

As the New York Times coined the phrase to describe Felder’s performance, it is “theatrical impressionism!” I couldn’t agree more.

Not only does Felder portray Beethoven as a child and later an older man, he’s also all the characters that describe the history and musical genius of Beethoven. From the narrator, a Viennese doctor who spent his childhood by the maestro’s side, first as a young 12-year-old boy and then as an adult 40 years later, we learn of a father who beats his son, brothers, uncles, friends and other relatives who all helped to shape Beethoven’s life. This was very cleverly done, very convincing and very entertaining. We learn his story through this cast of characters all while Felder walks to the piano bench and plays many compositions while effortlessly telling us the story of Beethoven’s life. Not enough can be said about the brilliant playing of Beethoven’s music by Felder, an accomplished concert pianist.

What I loved about the play were the tiny little details that Felder so thoughtfully demonstrated. For example, he describes how Beethoven went deaf at the age of 31 years old, and that his most memorable and famous pieces were conceived and composed when he was completely deaf in the last 15 years of his life. One of the stories that I enjoyed was when Beethoven was sitting by a tree and watching a woodpecker. And though he could not hear, he could feel the vibrations. Da da da dum…. Da da da dum…. And this became one of his most famous and recognized compositions, Beethoven’s 5th Symphony. It was as if Felder was giving us insight directly into the genius of Beethoven. 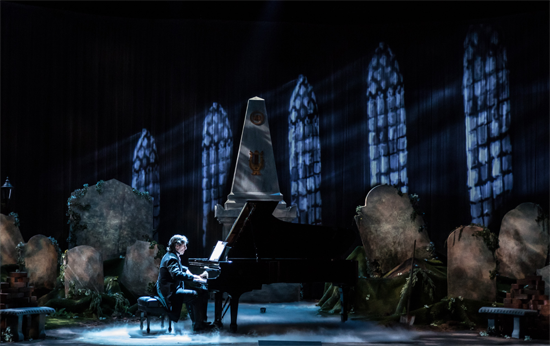 Photo by Christopher Ash; courtesy of The Wallis

The Wallace Annenberg is such a perfect venue for this intimate show. The lighting and projection design by Christopher Ash were also instrumental (pardon the pun) in telling the story and showing us this very moving performance.

What a treat! I recommend seeing Hershey Felder in Beethoven as soon as you can get a ticket! Beethoven has now has been extended through August 19th