Skip to content
PIck of the Week…Celebrate Curators at Gabba Gallery with “Curate This,” February 28!!

Our Pick of the Week…takes place at Gabba Gallery. “Curate This,” is the first annual exhibition highlighting the work of contemporary Los Angeles Artist/Curators. The group show is curated by Jason Ostro and Phil Santos.

This almost 2000 sq. ft. gallery sets off your curiosity 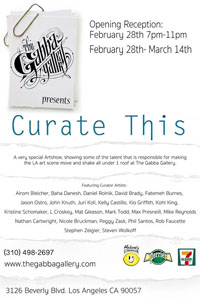 as you see the visions and interpreted inner workings of these curators in their own practice. A fresh feeling comes forward in this exhibition, by turning the tables and bringing them together in one place, the viewer is brought into an explosion of ideas, loosely held together by a strong vision for Los Angeles and its place in the world of art. The showing embraces several artists to create a thoughtful, inspired feel as you embark into the imaginations of artists such as Nathan Cartwright of The Hive Gallery, Stephen Zeigler of Indian Alley and Mat Gleason of Coagula Curatorial.

“We’re not sure when it came to us, how cool it would be to turn the tables on LA’s contemporary Artist/Curators, it just took off… We are very excited to have all of these remarkable talents under one roof for the first annual CURATE THIS. The art is stunning. -Jason Ostro, Curator

he artists featured in “Curate This” are contemporary Los Angeles based curator/artists hand-picked by curators Ostro and Santos as an homage to them and their vision for the Los Angeles art scene.

“I was thrilled Jason invited me to be in the show. Gabba Gallery is a cool environment and showing with all these folks I know is great,” said Mat Gleason, art critic/curator/artist and owner of Coagula. “I never really show my work. As a critic and art dealer I try to keep everything as separate as possible.”

Gleason said he only exhibits his art when asked…he went on to say, “I would never want to take the spot in an exhibit that another artist would be getting. I am really strict about that… as a critic, every time I trash a show it has been on the assertion that a more deserving artist must be out there and the sin in bad art on display is that good art somewhere remains unseen. So when I get invited, I order up the fabrication of the object.”

Gleason will be showing a meditation on walking his dog. He added, “That is all I will say. It is a 3D object that must be seen in person. It is being made right now. I have not even seen it…I have only imagined it.

Artist/Curator/Filmmaker, Juri Koll’s work will also be included in “Curate This.”

Koll will have two paintings in the show. “‘Vitraazid Kood Blue 1,’ is part of a series of paintings based on a shorthand, or code, which I’ve found myself using without actually thinking about it,” explained Koll.

“I like the practice, idea and fun of risk taking. Watercolor mixed with oil pastel, and sometimes pencil, helps me work with that in each painting. You never know where it will end, or where it begins. You just have to go with it.”

Airom Bleicher owner of bG Gallery will be featuring a grid of 4x4in works called Micro Gestalt in the show. “This is my first time working with Gabba and I’m enjoying it I like their attitude and outlook.”

He went on to say it was difficult being both a gallery curator and an artist at the same time.  In 2014, Bleicher moved his gallery to Bergamot Station which has put even more time restraints on the galleriest. 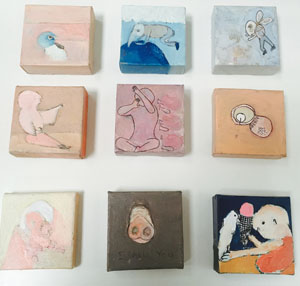 “The trick is to find hours when maybe you’d be sleeping and make art instead dreaming on the canvas instead of dreaming in your head.”