Our Pick of the Week is the Ten Year anniversary of the Walter Maciel Gallery, located in the bustling Culver City Arts District. The group show entitled “A Star Is Born: Ten Years Later” features twenty artists and brings the gallery full circle. 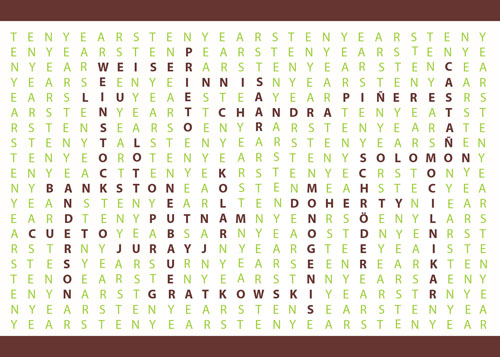 think Walter Maciel says it best…(see the unedited version on the gallery website):

The title of the show plays off of As Good As Your Next Gig which was the name of our inaugural exhibition and celebrates the career growths and inherent changes with our artists over the past decade. Our first show commented on the state of the art world in 2006 with a thriving market, record breaking auction results and the excitement of taking risks associated with emerging and mid-career artists.

Ten years later, we have survived a significant downturn in the market as a result of the biggest economic recession since the Great Depression and we are adapting to new formats and structures in the gallery business. Our current art world is one that continues to be on the rebound with new challenges, expectations and developments but executed with the same overall support and commitment to the artists in our program.

The exhibition includes the 20 artists represented by the gallery as well as four artists who have been affiliated with our program. The artists include Barry Anderson, John Bankston, Carolyn Castaño, Walt Cessna, Freddy Chandra, Oscar Cueto, Colin Doherty, Tm Gratkowski, Cynthia Ona Innis, John Jurayj, Andy Kolar, Hung Liu, Brendan Lott, Greg Mocilnikar, Dean Monogenis, Rachael Neubauer, Maria E. Piñeres, Pepa Prieto, Robb Putnam, Lezley Saar, Nike Schröder, Lisa Solomon, Jil Weinstock and Dana Weiser. For our anniversary show, each artist was asked to contribute artwork that relates to his or her exhibition history with the gallery, a personal association with me and/or an attribute about our professional partnership.

Many of the works included in the exhibition represent previous inventory that was introduced to me during my first studio visit and later exhibited at my gallery. An example is the painting Untitled (Bomb, 2005, #2) by John Jurayj, which I discovered in his Brooklyn studio and learned the imagery depicts colorful and explosive bombed out buildings from Beirut’s Civil War. Robb Putnam’s installation of animated stuffed dog snouts is a new rendition of a grouping he executed in 2009 as part of his first solo show at my gallery. Rachael Neubauer revisits an early wall sculpture that is made of polyurethane resin from 2002 when she and I worked together in a San Francisco gallery. 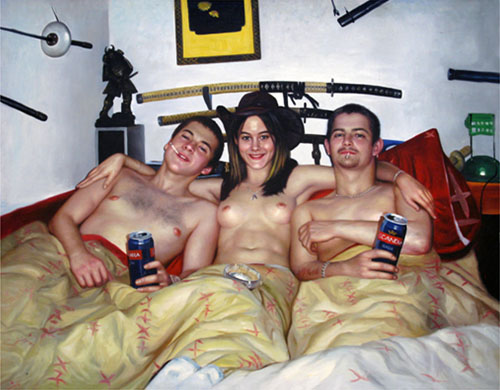 Brendan Lott’s evocative yet disturbing paintings from his Paintings of the Vernacular series were first seen at a colleague’s booth in an art fair and later included in a group show at my gallery. In 2007, Lott trawled photo-sharing websites for his source material: ordinary snapshots of people he’s never met, many of whom are posed in sexually suggestive or perverse ways. The images were then sent to China where Lott paid artists to paint photorealistic replicas.

My introduction to Walt Cessna’s work happened through one of my artists who has the same social network through their early teenage years spent in New York in the 1980s. Their relationship continued into adulthood and followed the adventures of Cessna’s various careers as a fashion designer, stylist, prostitute and photographer. My initial awareness of Andy Kolar’s work occurred while walking past his work space on occasional studio visits with another artist with whom he shared a studio space. Our show incorporates similar shapes into a playful wall installation showing a relationship to the interior space of the gallery. Like Kolar, Pepa Prieto’s work was introduced to me through a gallery artist and her studio was a shared space, however her studio mate ended up becoming her husband. Included in the show is a painting I saw during that visit and it was originally exhibited in Prieto’s first solo show “A Place to Get Lost last summer.”

Tm Gratkowski’s paper and concrete sculptures caught my eye on social media and quickly lead to my first studio visit where I learned he folded various pages from art and fashion magazines into wet concrete set within amateur made molds. Once the concrete set, the paper was ruffled out and crimped into position to create a nice balance between the delicate and playful quality of the paper and the hard and neutral presence of the concrete. The triptych Mis amigos me ayudan a ser un mejor artiste by Oscar Cueto was discovered unexpectedly on a visit to Zona Maco in Mexico City before opening my gallery in 2005. I purchased the painting, which shows the artists being beaten to a bloody pulp with well known art theory books by his friends as his injuries worsen from one panel to the next.

Some of the artworks in the show include my portrait that has been rendered using the styles and motifs from each artist’s milieu. 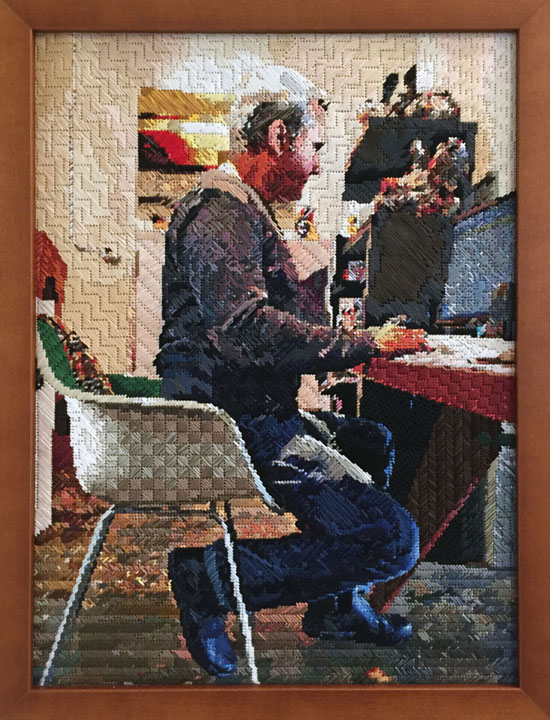 Working within her new series Sittings, Maria E. Piñeres chose me as a subject for a portrait done using her embroidery technique. The series debuted last year in a solo show at our gallery and the subjects varied from personal friends to strangers. Lisa Solomon and I have been close friends since the mid 90s before we had a professional relationship. At the opening of my gallery in 2006, she was included in the celebration and selected an image of me in a celebratory pose taken in the entrance under my logo. Similar to a series of family portraits installed in her first solo show Migratory Patterns, the portrait is rendered in watercolor on panel with an overlapping stitched replica done on transparent fabric.

Nike Schröder also uses thread to create her work and she includes a stitched painting on canvas with images of me socially surrounded by loved ones and my pets offering a view of my personal life. Freddy Chandra breaks away from his process oriented abstract work with the presentation of a graphite portrait of me on plexiglass, a familiar medium for Chandra’s light reactive paintings. The meticulous execution of his work focuses on the delicate use of line and his ability to translate personality and expression across colored plexiglass panels that correlate with the colors of my gallery logo.   Jil Weinstock chose a different type of portrait based on the actual toys from my childhood. She organized my collection of Hot Wheels and embedded them into her signature rubber medium to be displayed as a light box within a stainless steel frame.

Carolyn Castaño presents a hard-edge “W” (or “M” if turned upside down) set within an animated flower garden that references the flora and fauna of the Azores Islands, Pico and Sao George, the origin of my family ancestry. The landscape also includes a playful cat knowing of my great fondness for feline creatures. Continuing on the animal theme, Dana Weiser features a kitschy ceramic cat in a regal pose using her signature sparkly automobile paint and flecks of gold leaf. Weiser received her MFA in ceramics at UCLA in 2007 and included two ceramic sculptures in her recent solo show “Without You, I Couldn’t Be Me…” Keeping within the parameters of her Gender Renaissance series, Lezley Saar presents a portrait of a bi-racial gentleman dressed in a jacket and tie with allegorical themes of nature growing from his head. The painting is entitled A Perfect Gentleman perhaps alluding to characteristic of our previous dealer/artist relationship but more importantly the mutual respect and admiration we have for one another as longtime friends. John Bankston’s work is also based in the imagination with an interpretation of a cast or characters who explore notions of male bonding and masculine behavior. In comparison, Cynthia Ona Innis shows several small format paintings that reference the same geography of California used as inspiration for her solo show Shift last year. Although we were raised on opposite ends of the state, both Cynthia and I are native Californians and we met as undergrads at UC Berkeley in 1989. 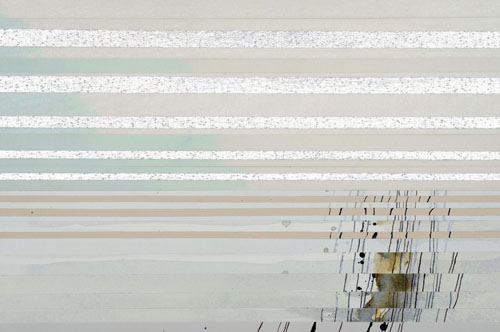 The selected works reference the farmland and Delta in the Sacramento Valley where I grew up and an area that has strong family roots on my maternal side. Barry Anderson’s photo collage with LED light depicts a still life by French artist Henri Fantin-Latour with the center split open to reveal an obscured view of his son Finn. The image references the 1983 New Order album cover for Power, Corruption and Lies but replacing the still life used on the album with a similar painting by the artist and turning it upside down.

Colin Doherty’s cosmic landscape honors my relationship to my artists and role as an educator of contemporary art in a public space. His painting includes architectural references as well as spiritual markings and is rendered in Doherty’s iconic style using simple brushstrokes and bold colors. Greg Mocilnikar’s work also entails notions of space but interpreted into abstractions conceived from realistic renderings based on experiences with me, and my gallery. A new painting by Dean Monogenis offers a different kind of collage with an orderly composition of linear and grid patterns overlaid with a few carefully placed drips. Hung Liu presents a new print depicting an image of two young girls from the archive of Dorothea Lange as part of her new series exploring American subjects. Dorothea Lange died in 1965 in Berkeley where I lived while I was in college.