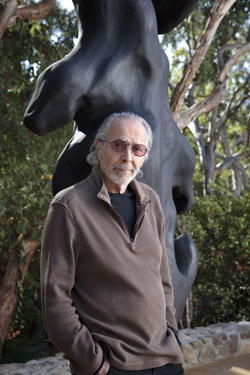 ick of the Week takes place at Bergamot Station….one of my favorite hang-outs…and who throws a better art party than Robert Berman???

Well you are in for a treat…you many have heard of the renowned musical genius Herb Alpert???  Well Mr. Alpert is also an incredible artist.

“in•ter•course” is a collection of Herb Alpert’s newest paintings and sculptures. The exhibition will include a video and catalogue.

Let’s hear what the gallery has to say:

In addition to his musical accomplishments, Herb Alpert has spent more than half his life
as a respected abstract expressionist painter and sculptor, whose work has been exhibited
all over the world, from New York to Berlin.

Since he began painting in 1969, Alpert has
experimented with a number of different styles and materials, perhaps none more unusual than his current medium of choice: organic coffee.

Alpert’s sculptures, particularly his towering Black Totems series, continue to draw interest with their freedom of form and massive size, with some pieces reaching 18 feet in height. 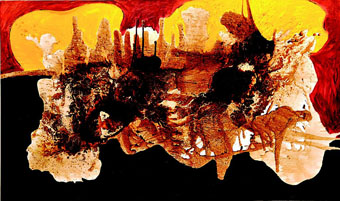 totems were inspired by indigenous sculptural forms from the Pacific Northwest. What begin as hand-sized forms are scaled up and cast as ten to 18 foot high monoliths.

Just as the origins of Herb Alpert’s music with the Tijuana Brass can be traced back to a Tijuana bullfight, his start as a painter likewise began with a trip south of the border. 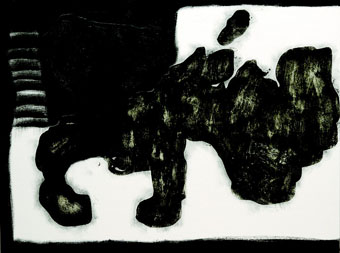 ugh Alpert’s work as an abstract expressionist painter has been inspired by a number of different sources over the years, he cites his single greatest influence as artist Rufino Tamayo, whose work first sparked his interest in painting in 1963.

Herb Alpert’s philosophy as an artist has generally been to create from a purely internal place; “the feel,” as he calls it. External considerations, such as social or political commentary, rarely factor into the work. “For art to appear,” Alpert likes to say, “the artist must disappear.”

Creativity is Alpert’s staff of life, his daily bread. Whether its music, or painting, or sculpture, he launches in headfirst, like a soloist coming out of the chorus, rolling to a rhythm he feels inside, searching for a sound that gets at that feeling, that mysterious thing. “When I paint or sculpt,” he says, “I don’t have anything in mind. I don’t have a goal in mind other than form. I’m looking for that form that touches me and when I find it I stop.”

The Robert Berman Gallery is open Tuesday through Saturday, 11am-6pm and by appointment 310-315-1937