Skip to content
Pick of the Week…”The Great Unknown” Opens at the G2 Gallery Saturday, June 20!

k of the Week….The G2 Gallery takes us out of this world with “The Great Unknown.”

The show will include three distinct collections: “Mars Seen,” which will feature massive, 8-foot 3-D images of the landscape of Mars from xRez Studio; “Martin Cohen,” featuring astrophotography from the eponymous artist, and “Without a Telescope,” a series of photographs of stars and nightscapes taken without the aid of a telescope by Beverly Houwing, Matthew Kuhns and Chris Miele. 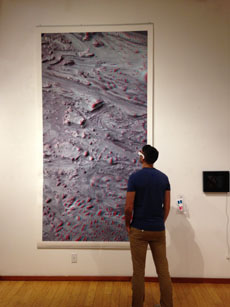 The Great Unknown” is a photography exhibit reimagining outer space as an environmental area that requires the same protection and conservation as our forests and oceans. G2 will partner with The Planetary Society and its CEO, Bill Nye, donating all its proceeds from art sales to the organization.

“The Great Unknown” will be the first exhibition of its kind to equate outer space with endangered environments on Earth. To date, no environmental protections for extraterrestrial areas have been passed, but increasing technological advances in space exploration suggest that this new frontier would benefit from such protections.

“Space is one area that’s fairly undamaged by humans, and to keep it that way, we need to protect it,” says G2 Director Jolene Hanson. “One way to inspire conservation is with stunning photography, just as Ansel Adams did with Yosemite and Joel Sartore has done with endangered species.” 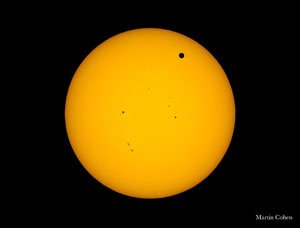 L.A.-based photographer Martin Cohen has more than 35 years of visual arts experience. Originally from the Netherlands, where he attended the Dutch Film Academy, Martin has lived in the U.S. for almost 30 years. His interest in astronomy dates back to his teenage years in Amsterdam, where he took his first shots of the moon through a small Unitron telescope back in the 1970s.

Beverly Houwing’s “The Great Unknown: Without a Telescope” features constellations, star trails, planetary conjunctions, lunar crescents, earthshine and meteors. All of these incredible astronomical events were captured with just the use of a digital camera and tripod. 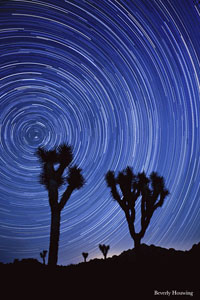 You only need one mode in order to execute a successful photograph of astronomical events using a digital camera: manual. Complicated programs and extras aren’t necessary as long as you can freely choose the exposure time and aperture.

Admission is $10 at the door and includes wine, hors d’oeuvres and complimentary valet in front of the gallery. All proceeds from admissions will be donated to The Planetary Society. RSVP to rsvp@theg2gallery.com.