Pick of the week is this Saturday, Santa Monica Art Studios hosts a group show.  Artist Brooke Harker is one of the artists featured in Saturday’s exhibition. 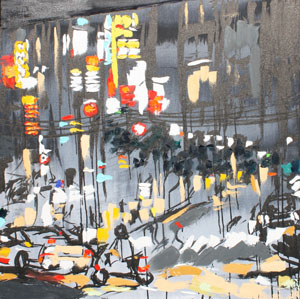 ker most recently showed her work as part of a group exhibition at Destroy Rebuild Repeat Gallery in Santa Monica. As I write this, she is on her way to NYC to connect with New York’s thriving art scene.

I had a chance to catch up with the busy artist and ask her some questions about what she will be showing….

Harker explains, “I lived in Tokyo one summer and worked for the Tokyo American Embassy with children. In my free time, I prided myself in wandering the city, getting on subways not knowing where they were going, and taking photos. My camera at the time was not digital…so developing 20 rolls of film upon return to the states was quite a treat. It was exciting to see what I had captured. Generally the reunion with images brought a mix of feeling that I had discovered treasure, then the disappointment of learning that I had not captured everything that I had seen with my eyes on film. “Tokyo Night 1″ drew inspiration from one of my many photos from that summer, taken out the window of a moving vehicle.” 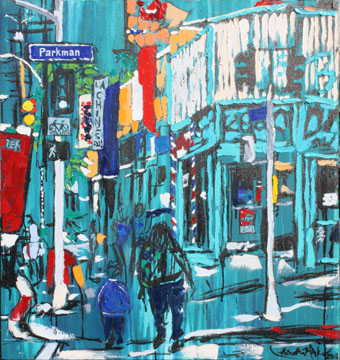 Harker admitted she was excited to show her work at the Santa Monica Art Studios. “I have always wanted to show at the Santa Monica Art Studios,” says Harker. “I love the work of so many of the artists who show or have shown there and have returned many times over the years to see the works and progress of many of the artists. Besides the facility itself being beautiful, I enjoy being able to see so much art in once place, only parking the car one time and be part of the crowd of bustling art patrons and a lovely atmosphere.”

The exhibition runs through June 20th.