Skip to content
Pick of the Week is this Saturday, “Stop Haunting Me” at Merry Karnowsky Gallery

A solo exhibition, “Stop Haunting Me” may remind us all of our own strange and bizare dreams. You know what I am talking about….the ones where you wake up in a crazy state and say “what the f*$%K was that? 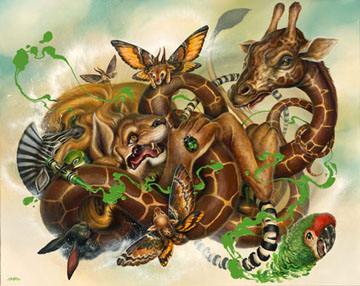 t’s hear what Merry Karnowksy has to say….here’s a press release from the gallery.

In this latest exhibition, Simkins’ dream creations have awoken, fully conscious and yet confined to two-dimensional canvas and paper surfaces. The bulk of their animal shapes are closely entwined in phantasmagorical scenes laced with rich narrative and haunting personification.

With this exhibition, Simkins set out to explore the things that keep us up at night. “I always wonder what my life would be like had I not picked up a spray can and began writing ‘Craola’ 20 years ago” he says. Even with the sensation that the last two decades of his career have passed in the blink of an eye, Simkins is mindful of the power of the past: “Jotting down notes and sketches in the early hours has introduced me to a formidable cast of characters and themes which at times are innocent and playful, but also remind me of inevitable repercussions.”

His characters are primarily animals and bizarre hybrids, full of distinct colors and practically tangible textures. In some paintings these animals appear to be surrogates for the artist, or perhaps even the viewer. Simkins is keenly interested in role reversal and the possibility that our past may return to haunt us: “What would be the fate of a lion, who spent his life preying on giraffes and zebras on the African plain?” Other works are more cryptic and deeply symbolic. ‘Prey’ depicts a lamb with its back to the viewer, facing down a room full of wolves in flimsy and grotesquely ‘cute’ sheep disguises. At the lamb’s feet, red sacrificial wine pools from an upended chalice. Visually, Simkins’ style betrays his background as a graffiti artist, yet is also reminiscent of tattoo art, particularly in the arrangements of the more closely packed scenes. Though there is some humor inherent in this cartoony style, much of his appeal lies in its juxtaposition with the tensions that lurk just beneath the surface. 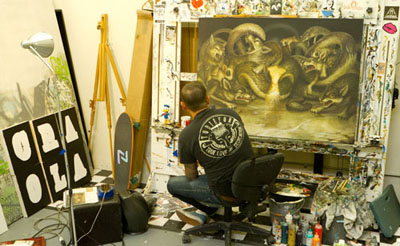 Simkins has not simply realized his fears and nightmares to let them roam free; this is catharsis at work. Simkins explains of his first graffiti piece: “The outpouring of ideas that has resulted from this singular event has become my sword to cut down the things that haunt me as they wake me from sleep.”

Greg Simkins was born in 1975 in Torrance California. At age 3 his early attempts at drawing were inspired by various cartoons and books, such as Watership Down by R. Adams and The Chronicles of Narnia by C.S. Lewis. At the age of 18, Simkins started doing graffiti under the name “CRAOLA”.

In 1999 Simkins received his Bachelor’s Degree in Studio Art from California State University of Long Beach and in 2005 began pursuing his desire to paint full time. He has since been featured in numerous group and sold out solo exhibitions in galleries throughout the world.