Our Pick of the Week takes place at New Image Art which will be debuting two new exhibitions this Saturday. The gallery has been featuring some wonderful exhibitions….check it out! 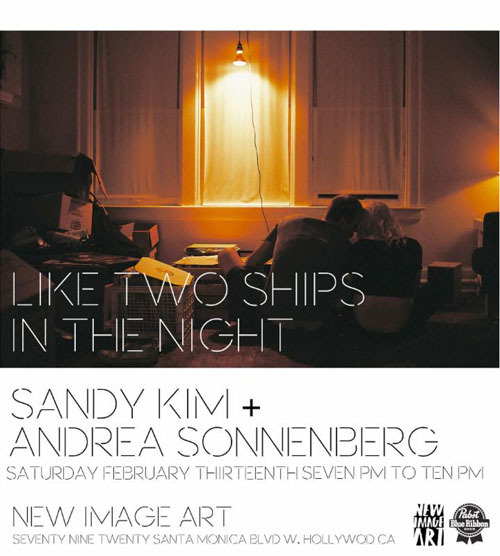 Here is some info from the gallery….”Like Two Ships In The Night” is a two person photo exhibition featuring Sandy Kim and Andrea Sonnenberg. Both originally from San Fransisco, Sandy and Andrea are currently LA based photographers whose intimate and raw images depict visceral perceptions of youth culture from the perspective of active participants.

“Sandy and I have known each other for just about ten years. Throughout that time, we’ve grown together as photographers from the beginning. In our early years, from Sandy’s influence on me to start shooting, and our daily routines of giving advice and editing through photos together as a team. I helped out as a close muse of hers, influencing the beginnings of Sandy’s feminine candid shots, to my eccentric attitude giving her some key shots in her long lasting repertoire of classics. As I began shooting on my own, our styles began to take form as two very different entities. While I found myself gravitating towards shooting subcultures of skating and graffiti, Sandy focused on her ethereal colored portraits and followed her relationship with Colby closely through the lens. After a brief time shooting together, being such huge influences on one another as we were, it was hard to separate. I was losing my mentor and peer.  After all these years, both of us have gone on photographic journeys of our own. During our time apart from one another, we have been watching closely the ebb and flows of our respective styles.  A reoccurring theme in our relationship as friends, as has happened many times, is our passing each other in cities across the world and here at home, by a mere couple days. With this show, our first one together, finally living together in the same city again ten years later, and working in a studio alongside one another once again, we would like to showcase some of our recent exploits, alongside older photos, and bring to light the fact that Sandy and I are “Like Two Ships in The Night”. As early influences on each other, and now both strong female influences on the younger generation of photographers and rebels, we find this is a sentimental part of our respective photographic adventures.” — Andrea Sonnenberg

In the project room a solo exhibition titled “Little Joy” opens tonight featuring oil paintings by Andrea Nakhla. Nakhla’s portraits reveal the many faces that make up the creative class of Eastside Los Angeles as she experiences it. Her subjects live within the confines of the loosly-drawn borders of a handful of neighborhoods that are severed from the ocean by a complex freeway system: Echo Park, Silver Lake, Highland Park and the like. As such, her work reflects its fragmented spirit from endearingly iconic urban backgrounds of bygone eras to the hopeful naivety of its artist who are often found clumsily assembling their adult lives inside tiny apartments. 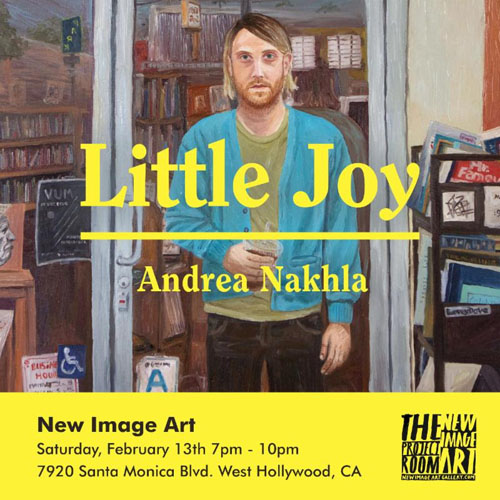 ndrea’s work recounts the ephemeral nature of early adulthood; a period punctured by nostalgia, crippling distraction, heavenly euphoria and in equal measure, a feeling of loss. Time plays a central role in her paintings as the act of painting itself serves as an homage to time and a sly attempt to capture it, hold onto it and keep it for a little longer. She, along with her subjects, feels time slipping away as if there was never enough to begin with. Always looming in the background. Whether in the sullen look of a young women frozen in her bedroom forever or a couple holding onto love in the united defiance of time.

This exhibition will display a series of oil based portrait paintings that beckon viewers to consider their own place in time and the small space that they themselves occupy as she invites them to commiserate, celebrate, and consider the fleeting reality of what it means to be in these parts of East Los Angeles during these times.