Our Pick of the week is a huge group show titled “MASque Attack” which takes place on Halloween at Temporary Space in Hollywood….152 artists. 152 pieces of art. Lots of flashlights. No sales….(say what?). Sounds like an interesting evening.

of MAS Attack, the Mutual Appreciation Society of artists, has taken a dark turn for Halloween 2015. Be sure to come in costume.

This is the ninth MAS Attack that Artra Curatorial has hosted. The exhibition is curated by Max Presnell (co-founder of Artra Curatorial), Kio Griffith and Colton Stenke.

Previous MAS Attacks have been held in San Diego, Las Vegas, Albuquerque, San Francisco, Torrance and Los Angeles. The MAS Attack model is a social media phenomenon, in which Artra Curatorial chooses the artists from nominations on Facebook. The exhibitors include professional artists represented by top galleries as well as emerging artists.

Founder Max Presnell said he was looking forward to the event and said it will be “A ghoulish gathering of fiendishly fun artists.” 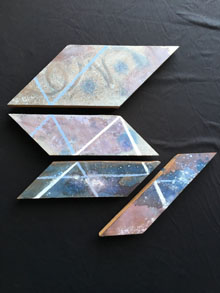 had a chance to speak with one of the artists who will be participating in the event. Venice artist Juri Koll and founder of Venice Institute of Contemporary Art (VICA) explained that his piece was was inspired by the original Kood series, (an Estonian word for code). “It’s part of an ongoing study of what makes language – gesture or foresight? The use of hardwood as a surface was inspired by my brother’s work as a luthier (stringed instrument maker), and I am using left over wood from a studio in Venice from which the artists – several of whom we have exhibited through ViCA – have been evicted over the last several weeks.”

Koll has been collaborating efforts with other concerned artists to attempt to deter the affects of the gentrification of Venice California which is having a negative impact on the arts community.

Koll continued, “I was inspired to make this piece  because the angles of the wood I discovered in an art studio my friend lived and worked in for decades reminded me of the angles I have been using in my work for a couple of years, so I said…why not change what I paint on?” http://veniceica.org/ 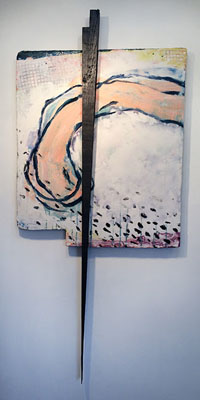 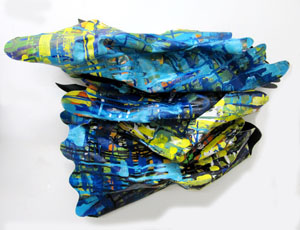 See image (above) by Shelley Heffler,