Skip to content
On View Now thru October 31, 2016, DINOSAURS: UNEXTINCT AT THE L.A. ZOO EXHIBIT!

Lurking impatiently in a once off-limits corner of the Los Angeles Zoo, a ferocious pack of 17 life-size, life-like prehistoric creatures await the opening of DINOSAURS: UNEXTINCT AT THE L.A. ZOO, a spectacular, all-new exhibit, on April 15, 2016. For a limited time only, these animatronic dinosaurs, brought to life with electronic “brains,” will take visitors back in time for a colossal adventure, providing a rare chance to discover a lost world from millions upon millions of years ago while warning about the very real threat of extinction faced today by many endangered species. 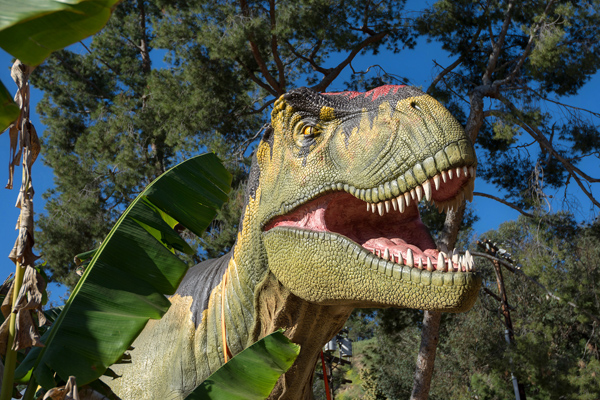 mong the exhibit’s added features is a Fossil Dig, a Stegosaurus robot with controls guests can operate to make the creature move; a climbable Pachyrhinosaurus; and a free downloadable augmented reality app to access special content, including 3-D views of all the dinosaurs.  The experience promises gargantuan levels of awe, as well as plenty of “aha”s, with fascinating facts about the prehistoric era, the featured dinosaurs and their similarities to L.A. Zoo animals.  Best of all, entry to Dinosaurs: Unextinct at the L.A. Zoo (#DinosAtTheLAZoo) is just $5 per person in addition to regular Zoo admission, and free for wee ones under age two.

Along the way, visitors encounter a Fossil Dig where they can brush away sand to uncover “bones” made from a fiberglass mold taken from an actual juvenile Maiasaura fossil, a large, herbivorous hadrosaurid that lived in the area currently covered by Montana during the upper Cretaceous period about 76 million years ago. Other “don’t-miss” fun includes a stop at a Stegosaurus robot with controls guests can operate to make the creature move, and a hashtag-worthy, dino-size photo op featuring a Pachyrhinosaurus, a dramatic-looking cousin of the Triceratops, with massive flattened growths over its nose.

Accompanying the exhibit is a free downloadable “Dinosaurs: Unextinct at the L.A. Zoo” augmented reality app providing an opportunity to interact up-close with each dinosaur by “unlocking” an animated model when pointing a digital device at a target image. Users can animate the dinosaur on their screen, making it walk and run.  Included in the AR app is a dino quiz, where visitors can test their dino knowledge. After completing the quiz, visitors are rewarded with a small gift at the dino gift shop. The app also features fact sheets and a bonus AR animal: the California Condor, a species that the L.A. Zoo is helping bring back from the brink of extinction, a process that guests can learn more about at the interactive California Condor Rescue Zone indoor learning space, which is adjacent to the dinosaur exhibit and open every weekend plus weekdays throughout the summer. (Check www.lazoo.org for schedule.)

The dinosaurs for the Los Angeles Zoo’s exhibit are provided by Billings Productions, one of only a handful of companies in the world that produce life-size, animatronic dinosaurs based on today’s best science for traveling and permanent exhibits.

Programming subject to change. Friday, April 15 through October 31, 2016, 10 am to 4 pm; Admission to the Los Angeles Zoo is $20 for general admission (ages 13 to 61); $17 for seniors (ages 62+), and $15 for children (ages 2 to 12), and admission for Greater Los Angeles Zoo Association members is free.  Admission to Dinosaurs: Unextinct at the L.A. Zoo is $5 per person in addition to regular Zoo admission; tickets are available online at lazoo.org/dinos and in person inside the Zoo at the Dinosaurs exhibit entry area.  Children under age two are admitted free to the Zoo and to the Dinosaurs exhibit.

The Los Angeles Zoo is located at the junction of the Ventura (134) and Golden State (5) freeways in Griffith Park.  5333 Zoo Drive, Los Angeles, CA  90027.  Free parking is available.  For tickets and additional information, contact (323) 644-6001 or visit lazoo.org/dinos  #DinosAtTheLAZoo