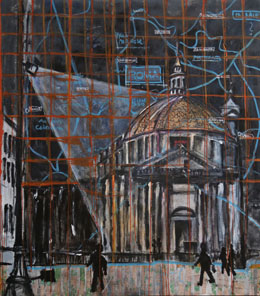 nta Monica Art Studios hosts new exhibitions which opened on July 25. In Arena 1, “Bliss Point” debuted  throughout the arts complex, the work of many Los Angeles artists are now on view. The work of several LA Art Party artists will remain on view in the South Hanger. Flavio Bisciotti joins the exhibition and will display works in the middle wall (South Hanger) along with the art of Ty Cummings, Scott Horton, Jennifer Verge will remain on view.

Flavio Bisciotti will will be featuring works from his Architectural series. “There are images taken to different buildings. The proportions and architectural elements converge over canvas applying layers of acrylic paint and collage technics. An accomplished Architect, Flavio loves to travel the world. The series is inspired by his travels. http://www.flaviobisciotti.com/

* Please note the 50′ wall featuring the works of Ty Cummings, Scott Horton and Jennifer Verge was originally curated by LA Art Party and VICA – Special shout out to Juri Koll for co-curating it with me. 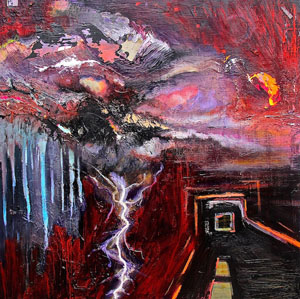 He works in a variety of media and said he bases his choice of medium on what he feels will most effectively feature what he wants to communicate.  http://www.tycummings.com/

Jennifer Verge will also be exh 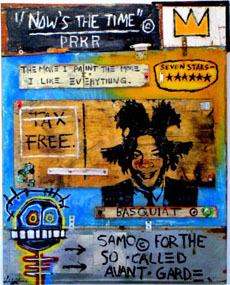 ibiting two works at SMAS. Working on wood, Verge creates truly original art with a positive spin. One of her pieces is titled “Basquiat.”

She explains her inspiration: “Basquiat is a huge inspiration to me,” explained the artist. “He’s a trail blazer…a true original, a risk taker with a style that is truly genius. I love that he painted in Armani Suits, while listening to Charlie Parker. I love that his first art show at the Gagosian Gallery in Beverly Hills He turned the back office into a VIP dance party. He had the GUTS to walk up to Andy Warhol and sell him his homemade POST CARDS before they would eventually become friends . His paintings are intelligent and playful, paintings that took the art world by storm. I loved painting this Piece it was pure pleasure.” http://www.jenniferverge.com/

Scott Horton’s work will also be included in Saturday’s SMAS exhibition. Horton’s love for music, and movies, has inspired him to create pop and street art. His college art professor was instrumental in encouraging Horton’s talent. Like many artists he paints when he is moved. “I’m not consistent, but when inspiration strikes, I’ll make multiple pieces; sometimes at the same time.” 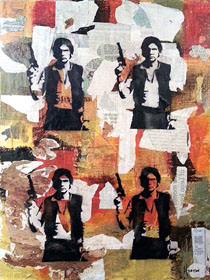