Skip to content
Now through February 10, 2019: The 39 Steps, Morgan-Wixson Theatre

Hitchcock meets hilarious in a fast-paced comedy mystery thriller for anyone who loves the magic of theater. Morgan-Wixson Theatre presents The 39 Steps, adapted by Patrick Barlow from the novel by John Buchan and based on the Alfred Hitchcock movie, directed by Aric Martin. The cast features Tristan Griffin, Genevieve Kennedy, Mikael Mattsson, and Christopher Tiernan. 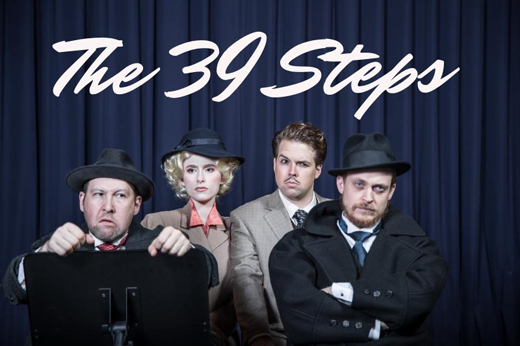 Patrick Barlow’s comical adaptation of The 39 Steps is a fast-paced, hilariously irreverent re-creation of Alfred Hitchcock’s classic mystery thriller film of 1935. Four actors portray some 150 roles. Leading man, Richard Hannay, meets a mysterious woman at a London music hall. After witnessing her murder, he becomes entangled in solving the crime, proving his innocence, and breaking a spy ring that seems to be attached to the whole affair.

The entire adventure is performed with only four actors. Christopher Tiernan plays the hero, Richard Hannay, and the others play the rest of the characters: over 150 good guys, bad guys, gentlemen, ladies, kids, and sometimes even non-human props. The show is a must-see for theater fans who love to laugh as well as Alfred Hitchcock fans as many of the classic films are referenced throughout the evening. The 39 Steps received the 2007 Olivier Award for “Best New Comedy” and the 2008 Drama Desk Award for “Unique Theatrical Experience.” 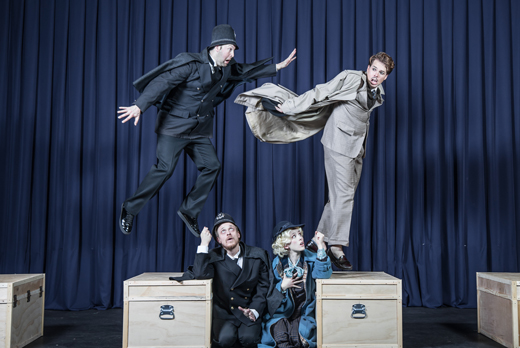 Director Aric Martin returns to the MWT to helm The 39 Steps after starring in this past fall’s production of She Loves Me. You may recognize Richard Hannay, played by Christopher Tiernan, from his roles as the Cat in the Hat in Seussical, and Peter in Peter and the Starcatcher. Genevieve Kennedy is making her Morgan-Wixson debut with The 39 Steps. She hails from Brisbane, Australia, where she studied acting at the Queensland University of Technology. Tristan Griffin was last seen at the Morgan-Wixson as Mrs. Bumbrake in Peter and the Starcatcher and as Owen in The Foreigner. Mikael Mattsson is so happy to be returning to the stage after many years working in front of the camera in numerous feature films including Scariest Night of Your Life, Already Lucky, and The Color of Truth is Grey.

This will be the first MainStage show where patrons will experience the brand-new seats in the house. The seats had not been totally replaced since the theatre was built in 1966. Hundreds of patrons donated to the “Fixin’ the Morgan-Wixson” campaign to raise the money for the project. There were also upgrades made to the back wall and lighting in the house.

Save the date…February 3, 2019, for a Talk Back (as soon as the curtain comes down). Visit www.morgan-wixson.org, or save online fees by calling (310) 828-7519, or email mwtboxoffice@gmail.com; Tickets $23 for adults, $20 for students and seniors Contact the box office for group rates.