THE BITTER GAME, a “high-impact” immersive theater experience ripe with pain, poetry, and laughter that explores the experience of being black in America, debuts at the Wallis Annenberg Center for the Performing Arts on Wednesday, November 14 through Saturday, November 17, 2018, outdoors on The Wallis’ Promenade Terrace. Playwright-actor Keith A. Wallace’s multi-character, solo performance in five acts, structured as the four quarters and overtime of a basketball game, tells the story of Jamel Smith, who witnesses a neighborhood act of violence as a child and later must learn to navigate his interactions with police. It speaks to both a personal and universal truth that is “a sharp reminder of the persuasive powers of live theater,” according to The New York Times, which also described the play as closing the gap between artist and audience, giving the familiar subject an “unignorable visceral immediacy.” 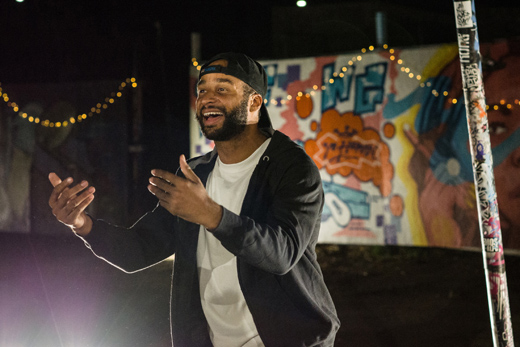 Photo courtesy of The Wallis

Based on Wallace’s youth in Philadelphia, THE BITTER GAME is created, written and performed by Wallace, co-created by Deborah Stein, and directed by Malika Oyetimein. On why he created the play, Wallace says, “The murder of Michael Brown in 2014 was to me a public display, in the way that public lynching used to take place as a warning sign and display of white power and supremacy. All of the mothers rendered childless from these situations are thrust into the spotlight and not afforded the same opportunities to mourn and grieve in the same way other mothers are. I got tired of seeing black people murdered by police with impunity, and it was time for a reckoning.”

Wallace hopes the play will eventually reach beyond the theater to be used as a tool of sensitivity training for law enforcement and performed with schools and communities reflected in the story. Warm attire and comfortable shoes are suggested for audience members, who are also warned to expect the play’s strong language.