The Wallis Annenberg Center for the Performing Arts presents Blues in the Night. Conceived and directed by Sheldon Epps, the production will feature Yvette Cason (Shout Sister Shout, Broadway and film versions of Dreamgirls), Bryce Charles (The Book of Mormon, ABC’s “Black-ish”), Paulette Ivory (Disney’s Aida and the West End premieres of The Lion King and Blues in the Night) and Chester Gregory (Broadway’s Motown: The Musical, Hairspray and Sister Act). Blues in the Night will begin performances April 27 through May 27 (it has been extended) in the Lovelace Studio Theater.

“In exploring potential projects with Sheldon, I was drawn to his original production of Blues in the Night, which ran in a small Off-Broadway theater in the early 1980s, and at the Donmar Warehouse in London,” said The Wallis’ Artistic Director Paul Crewes. “I loved the idea of Sheldon coming back to the work, placing it in our Lovelace Theater, and revisiting the intimacy of this wonderful production.”

The soul of the blues wails out full and strong in Blues in the Night, the scorching Tony and Olivier Award-nominated musical! The 26 hot and torchy numbers – by icons Bessie Smith, Duke Ellington, Johnny Mercer, Harold Arlen and more – tell of the sweet, sexy and sorrowful experiences that three women have with the lying, cheating, snake of a man, who represents the men who do them wrong. The Wallis is honored to have Los Angeles theater luminary Sheldon Epps return to his breakout hit. Staged in our intimate Lovelace Studio Theater, Blues in the Night will you leave you energized, inspired and ready to wail. 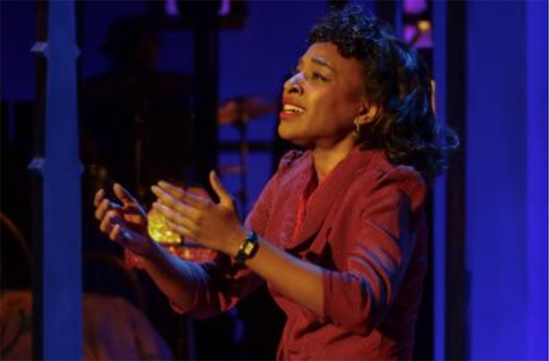 Bryce Charles (The Girl With A Date). BLUES IN THE NIGHT; Photo Credit: Lawrence K. Ho

Single tickets are now available for $60 – $75. For more information or to find out more about various subscription offers  and to purchase tickets, call or visit the website (see below) or stop by in person at the Wallis Annenberg Center for the Performing Arts Ticket Services located at 9390 N. Santa Monica Blvd., Beverly Hills, CA 90210. (Ticket prices subject to change).