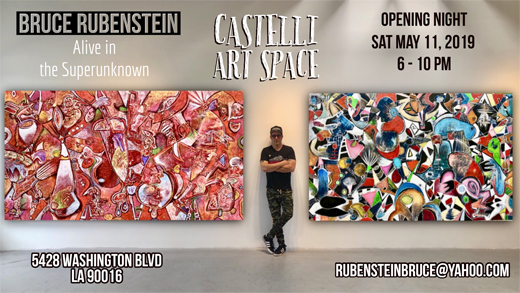 The New York native is a jack of all trades, and has seen a lot of life, love and tragedy. He has survived with the help of his art, family and friends. Growing up he always loved art. He cited Mark Bradford, Cecily Brown, Joe Bradley, George Condo, Julie Mehretu…as an inspiration to his art. Other favorites include: Picasso, Pollock, Jasper Johns, Franz Kline, Arshile Gorky, Pousette-Dart, Mark Tobey, Miro, Kandinsky, etc. “I was blown away by the entire NY school of abstract expressionists. In retrospect I think many of my organic, bio-morphic shapes are derived from my exposure to Gorgky and Miro…more of a lyrical abstraction approach.” 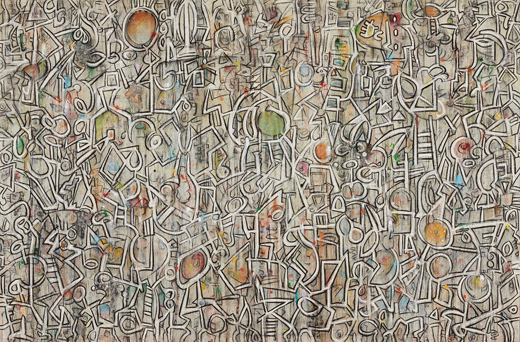 In 1985, he met Mickey Rourke while he was working in NYC as a window dresser a swanky boutique in Soho. The two immediately hit it off, and Rourke offered him a job as a driver/assistant. Rubenstein trusted his intuition, packed up, and moved his family to LA. He soon worked up the ranks to be a trusted part of the actor’s team. He forged a strong bond with Rourke who would later become a collector of Rubenstein’s art. “He has always been supportive of my art, and he himself is a pure artist through and through.”In 1994 Rubenstein wrote a movie about his life growing up on the streets of New York called Bullet. Rourke agreed to star in it, along with other well-known actors such as Adrien Brody, Ted Levine and rapper Tupac Shakur. During this time, he also founded a decorative painting company called Red Ruby Paintworks in Los Angeles. “We specialized in faux finishes, murals and Venetian plastering. I did many large murals throughout the Los Angeles area including The Kodak Center, The Henry Fonda Theatre, Wolfgang Puck restaurants, The Highlands nightclub.” 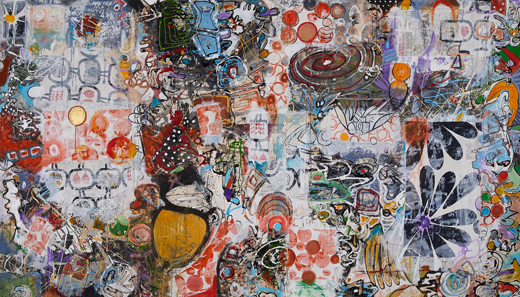 He went on to become the manager of NY comedian Andrew Dice Clay as well as executive producing Dice (on Showtime) for two years. However, his art was always calling to him.

Rubenstein has thrown himself into his painting – working ten hour days, everyday. “It took me so many years to find my true voice as a painter. And now that I have I can’t stop working at it.” He still speaks to Rourke at least once a month. “I lost both of my brothers to drugs many years ago. And Mickey lost his brother Joey to Leukemia ten years ago. So Mickey and I are really like brothers by default. We have so much history together.” Find out more about the artist on his website – https://www.brucerubensteinart.com