UCLA’s Center for the Art of Performance (CAP UCLA) presents “An Evening with Lettuce & John Scofield” on Wednesday, March 20 at 8 p.m. at The Theatre at Ace Hotel Downtown Los Angeles. 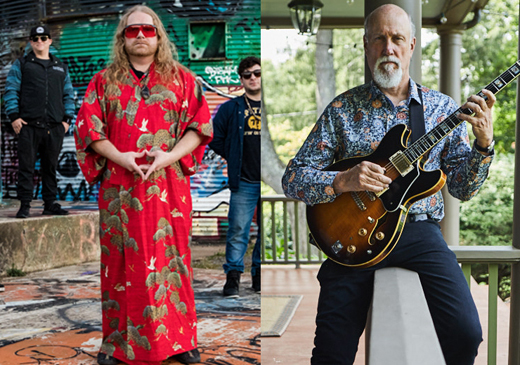 Presented by CAP UCLA, Lettuce (left) will be joined by legendary guitarist John Scofield (right) on Wednesday, March 20 at The Theatre at Ace Hotel DTLA

Influenced by Earth, Wind and Fire and Tower of Power, among others, undergrads started Lettuce following a music program at Berklee College of Music. Jamming out the summer of 1992 led to engagements in New York, San Francisco, Chicago, and even a following in Tokyo. Their first album Outta Here began Lettuce’s mission of bringing vigor and spunk to classic funk.

For their Theatre at Ace Hotel debut, Lettuce will be joined by renowned guitarist John Scofield. An influencer of jazz, Scofield has collaborated with Pat Metheny who performed at CAP UCLA earlier this season. In addition to touring and recording, Scofield is on staff at New York University as an Adjunct Professor of Music.

Punctuating traditional jazz with funk-electric music, Scofield pairs well with Lettuce’s style. An Evening with Lettuce & John Scofield is a celebration of “terminator jazz” and for the love of funk. Credited as a six-man wrecking crew of booming, brassy, hip-hop influence by Indy Star, Lettuce is a guaranteed party whenever they perform. An Evening with Lettuce and John Scofield completes CAP UCLA’s American Roots series. For more on the rest of CAP UCLA’s 2018-19 season please visit cap.ucla.edu.