Skip to content
Closed Until Further Notice – APRIL 5, 2020: Palos Verdes Art Center. Suffragette: Photography of the Women’s March LA by Monica Orozco
Update from PVAC as of March 16, 2020: Your safety and well-being are always of the highest importance to all of us at PVAC. In light of the evolving COVID-19 health crisis, the Palos Verdes Art Center campus, including galleries and the office, will temporarily close to the public through April 5. All meetings, including artist groups and class make-up sessions are cancelled until further notice.

The “Suffragette: Photography of the Women’s March LA by Monica Orozco” is on view at Palos Verdes Art Center / Beverly G. Alpay Center for Arts Education. Woman have been part of almost every resistance movement around the world at least since the start of the 20th Century,” said Erica Chenoweth, Professor, Harvard Kennedy School of Government. Call prior to visiting – 310.541.2479. 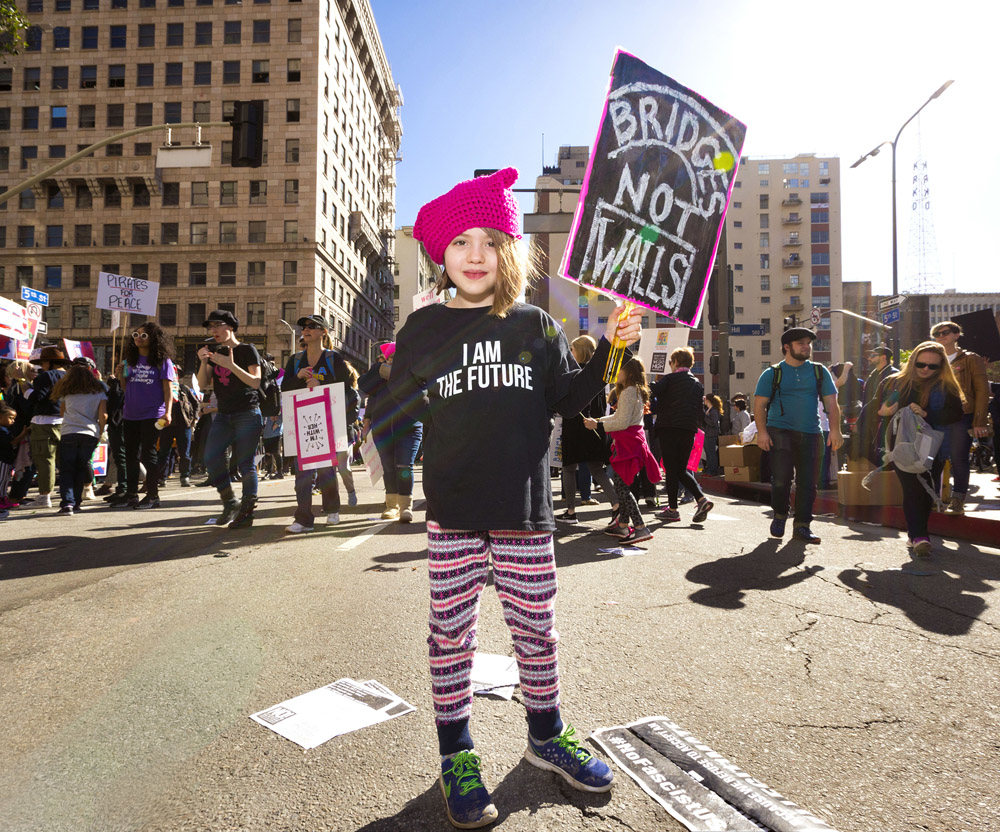 I am the Future, the Women’s Mach LA; photo by Monica Orozco

Curator Gail Phinney explained, “Passed by Congress in 1920, the 19th Amendment to the Constitution prohibits state and federal government from denying the right to vote to citizens of the United States on the basis of sex. The single largest extension of democratic voting rights in our nation’s history, it was hard fought over a period of decades through militant action, organized protests at the nation’s capital and suffrage marches across the country. This coincided with the larger, global women’s movement and the emergence of The New Woman, independent from her male counterparts. The term Suffragette was first used in 1906 as a derogatory term by a British journalist, but it was embraced by women in the suffrage movement around the world determined to SuffraGETte the Vote.

100 years later, we women are still marching for our rights. On January 21, 2017, women took to the streets to influence legislation on human rights, sending the message that women’s rights are human rights and advocating women make their voices heard by exercising their right to vote. The Women’s March became the largest single-day, peaceful protest in American history. Palos Verdes Art Center’s exhibition, Suffragette, was developed in partnership with the Palos Verdes Library District’s Women’s Suffrage Centennial Celebration. It connects the historical suffrage movement with the Women’s March LA by putting a face on these modern day Suffragettes and highlighting the variety of women of color, ethnicity, age and socio-economic status in attendance at the Women’s March LA during the years 2017-2020.”

Monica Orozco (b. 1970) is a Los Angeles-based photographer whose visual practice focuses on exploring multifaceted human experiences through the lens of the contemporary moment. Her photography is informed by the perspective of her multicultural roots. She was moved to document the Women’s March LA in a photojournalistic style, because, as the artist states, I felt that it was my duty as a visual storyteller to capture the March as my way of helping the cause. If I could showcase all the emotions during this event, and inspire others to unite, that was my goal. The power in numbers is energizing; you feel like One and believe that you can change the course of history.