Skip to content
On View Now…June Exhibition at TAG Gallery! 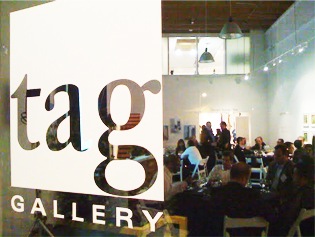 On the Edge: US, Anne M Bray
In her latest series, artist Anne M Bray provides a visual documentation of the perimeter of the 48 contiguous U.S. states. “Having already driven across the U.S. more than twelve times, I got the notion to try something new,” says Bray. After investigating ways to document her 300-400 mile driving days over the course of her solo venture, Bray opted for digital photography. Using the Waterlogue App, Bray transformed her initial photographs into digital “watercolors” before printing them on aluminum at postcard scale. 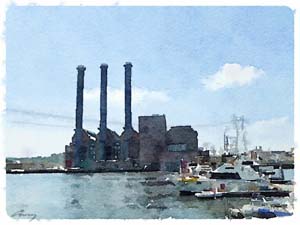 presents the images as continuous strips, much like how she experienced the landscape as it rolled by her car windows.

Each wall showcases a different perimeter of the country: South, East, North, and West. The effect is a passenger seat view of her journey on the country’s roads less traveled.

SWING, Katie Crown
In her latest series, artist Katie Crown challenges the traditional watercolor medium to create vibrant, large-scale swing dancers. Crown’s skilled brushwork captures remarkable detail in her subjects’ expressions and gestures as animated figures dance across monumental stretches of paper – some standing five feet tall. “I like working large, as it pulls people into the scene,” says Crown. “The dancers aren’t grounded. They exist somewhere between reality and cartoon.” Crown says she was initially inspired by the dancers she watched at the Rhythm Room, a blues club she frequented while living in Arizona, as well as summer concerts in Culver City. 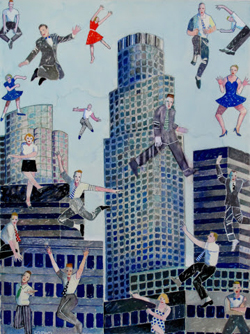 Her interest grew and she began to also collect photos of people dancing. “I don’t go for people embracing one another in their dance, but people separated from one another,” says Crown. “There’s a theme of alienation, but it’s [also] humorous.” In works like “Dancers Over L.A.,” frenzied figures float through space in active motion through downtown Los Angeles skyscrapers, each dancing independently from one another.

Crown uses stiff oil-paint brushes to dryly apply watercolor paint, scratching back and forth to create an essence of movement. Crown’s work radiates with a bold sense of color that matches the musical quality of her playfully surreal compositions.

an.i.mal, Jane Peterson
In mixed media artist Jane Peterson’s latest series, she further explores the spectrum of human emotion with particular attention to anxiety, passion, and fear. Cartoon-like characters make their way through Peterson’s fanciful compositions, ranging from grotesque insects and other worldly creatures to abstracted human forms that exist in an environment not entirely foreign from her viewers. “I find particular beauty in the exoskeleton of some insects. I imagine that hard shell form of protection working very well for other animals, including humans,” says Peterson. “Expressions such as ‘thick skin,’ or ‘iron will,’ when applied to humans, describe a metaphorical armor.” 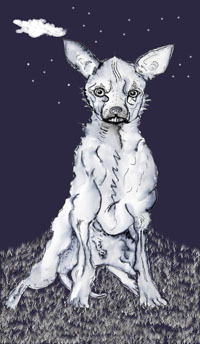 Surrealist imagery permeates Peterson’s two-dimensional prints and three-dimensional carvings as her figures wander between reality and the subconscious, taking on personalities that are decidedly familiar, yet eerie. In a series of images portraying a character Peterson calls the “Stomach Man,” the figure’s solar plexus – signifying the seat of fear – protrudes outside the body, becoming an appendage like an arm or a leg. Peterson uses this exaggerated body language to illustrate universal emotions of insecurity and vulnerability. A percentage of the sales proceeds will go to the Humane Society of Ventura County (HSVC).