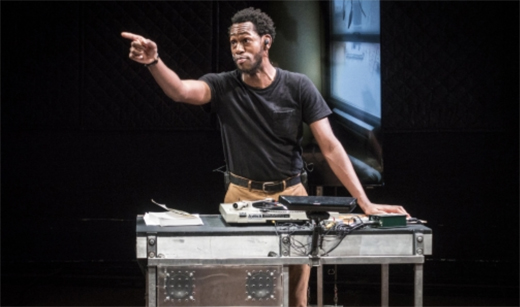 In The B-Side, performer Eric Berryman plays the album and transmits the material live via an in-ear receiver, channeling the voices of the men on the album. He is joined by Jasper McGruder and Philip Moore. Berryman also provides context from the book Wake Up Dead Man: Hard Labor and Southern Blues by Bruce Jackson, the folklorist who recorded the album at the prison in 1964. Berryman brought the album to The Wooster Group after he saw their piece Early Shaker Spirituals: A Record Album Interpretation, which REDCAT presented in 2015.   The New York Times Critics Pick review of the work, which the company first staged at the Performing Garage in 2016 and opened in 2017, says: “The act of listening somehow becomes a process that extends to and heightens all the senses … Performed a cappella, the songs spin tales of mythologically mean prison guards, and loves and lives lost, and the backbreaking purgatory of unendingly repetitive physical tasks… [The performers] become conduits for the songs of prisoners who were themselves conduits for an oral tradition that stretches back to at least the early days of slavery in this country.” The B-Side is directed by Kate Valk and designed by Elizabeth LeCompte. Lighting is by Ryan Seelig, sound by Eric Sluyter, video by Robert Wuss, costumes by Enver Chakartash. The musical director is Gareth Hobbs, stage manager Erin Mullin, technical director Jacob Bigelow, production manager Bona Lee.

Following its performances at REDCAT, The Wooster Group will stage The B-Side at St. Ann’s Warehouse in Brooklyn, New York, from March 1–24, 2019.