Skip to content
Now through February 17, 2019: Theatre 40, Rod Serling’s Stories from the Zone

Rod Serling’s Stories from the Zone opens at Theatre 40. Two classic stories from Serling’s best-loved TV series: In 1890 Arizona, a traveler comes to town claiming to have the ability to raise the dead, which makes the local townsfolk very nervous; In 1961, at a snowbound roadside diner in New England, the people there realize one of their group is an invading Martian. Adapted for the stage by Jeff G. Rack, Rod Serling’s Stories from the Zone is directed by Rack and Charlie Mount and presented by Theatre 40 and Arcane Theatreworks. 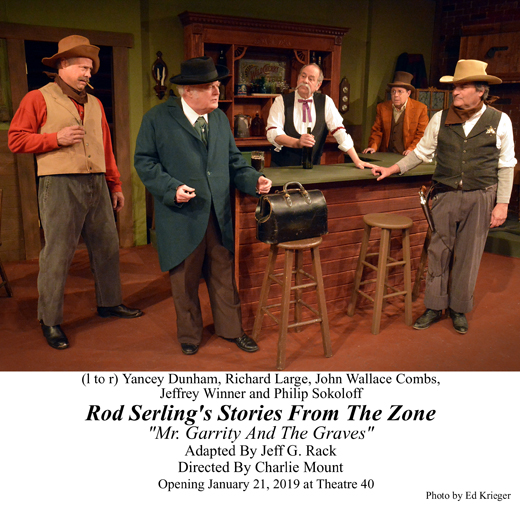 Writer Rod Serling (1924-1975) is celebrated for his work in feature films (Seven Days in May, Assault on a Queen, Planet of the Apes) and television (The Twilight Zone, Night Gallery, The Loner, the Emmy-winning Requiem for a Heavyweight and Patterns, which was presented in a stage adaptation at Theatre 40 in 2015).

As the show is running in repertory, show days and times will vary week to week. For a full performance schedule or to purchase tickets, go to www.theatre40.org or call (310) 364-3606. There is ample free parking beneath the theatre. Enter the parking area from the intersection of Durant and Moreno Drives.