of the Week is the LA Art Show. Yes, we are early in publishing this week, since the event starts today, Wednesday and runs through Sunday.

See my Huffington Post article about the LA Art Show. 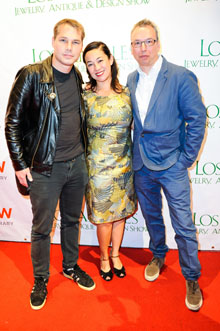 popular art happening celebrates its 20th anniversary and features both galleries and artists from all over the world.

Manager/partner Kim Martindale, who originally created the event, has witnessed first hand how the LA Art Show has evolved. He describes how the show has grown to include more  international galleries and continues to represent diverse genres of art. “The show has consistently been both a stomping ground for established artists and a launching pad for emerging talent,” said Martindale. “We’ve had more than a dozen Venice Biennale artists exhibit their works at our show, as well as artists that have exhibited at major museums such as the Met and LACMA.”

Previous years have featured exhibitions from renowned artists such as Suzanne Lacy, Shepard Fairey, Lee Yong Baek, and others. This year, new installations will be featured from the Los Angeles Art Association and FREEWAVES (who will not only be collaborating with Volvo, but have commissioned video artist Pascual Sisto to create an installation featuring tranquility via an automated driving experience).

J.J. L’Heureux never ceases to amaze me. A diligent artist working masterfully in many mediums, she recently returned from her fourteenth expedition to the Southern Ocean. 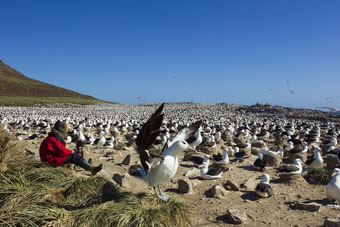 I had the chance to sit down with her as she recounted her unimaginable story of a six hour, horrendously choppy boat ride to Steeple Jason Island. Once there, she had to hike long distances in freezing temperatures….carrying heavy camera gear while having to defend herself from striking Striated Caracara birds (who actually pecked her head). These notorious birds are known for pecking out the eyes of their prey, then waiting until it becomes weak whereupon the flock dives in for the kill. (Personally, I would much rather fight off a mugger…Yes, nature is too scary for me, I’m still a city broad at heart!) 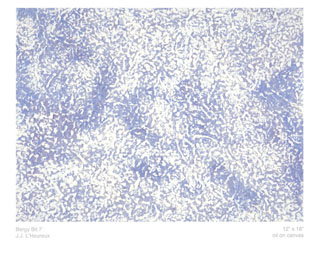 L’Heureux has documented a number of different species, including albatross colonies, yet she had previously never had the chance to visit this colony of Black-browed Albatross. Her recent trip to Steeple Jason Island allowed her to witness over 170,000 breeding pairs of this species. “I had the opportunity to spend 4 nights on this most protected island and watch these giant birds build nests, hatch their eggs, and feed newborn chicks,” L’Heureux explained. “Another aspect of this eight-mile long colony was the 100,000 Rockhopper Penguins that live between and under the Albatross’ cone-shaped mud nests. My days on Steeple Jason Island are already one of my most treasured memories.”

Upon returning from her expeditions, she has not only amassed an impressive selection of photographs, but has returned both inspired and renewed with new works envisioned. One of her paintings from her Bergy Bit series will be featured at bG Gallery’s booth (# 827). L’Heureux has been a painter for most of her life, however her Bergy Bit series was inspired after her first trip to Antartica back in 2000. For more info about the artist see her websites at http://www.jjlheureux.com/ http://www.penguinspirit.com 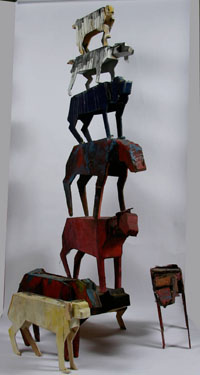 allery has previously featured the work of L’Heureux at its Bergamot Station gallery. This will be the third year the gallery has had a booth at the LA Art Show. Gallery Director Om Bleicher explains, “We’ll have new cityscapes by extraordinary landscape painter Gay Summer Rick whose work has in the past combined color field and impressionist elements and in this new work opens up the process leaving areas of the painting construction open to see trace layers of subtle pallet knife build up.”

The art of Stuart Rapeport will also be on view. Rapeport’s Dog Tower is a giant tower of dog, a stack of raw dog sculptures in a larger than life sculptural installation.

The G2 Gallery (located in Venice CA), will be showing Jennifer MaHarry (for the 3rd year in a row) The work featured includes a mixture of her classic mustang collection and her new wolves and coyotes – I LOVE this artist’s work. 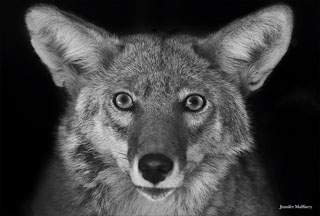 See image: Jennifer MaHarry, “Clever” a portrait of a coyote taken at the California Wolf Center.

For more info or to purchase tickets Click HERE