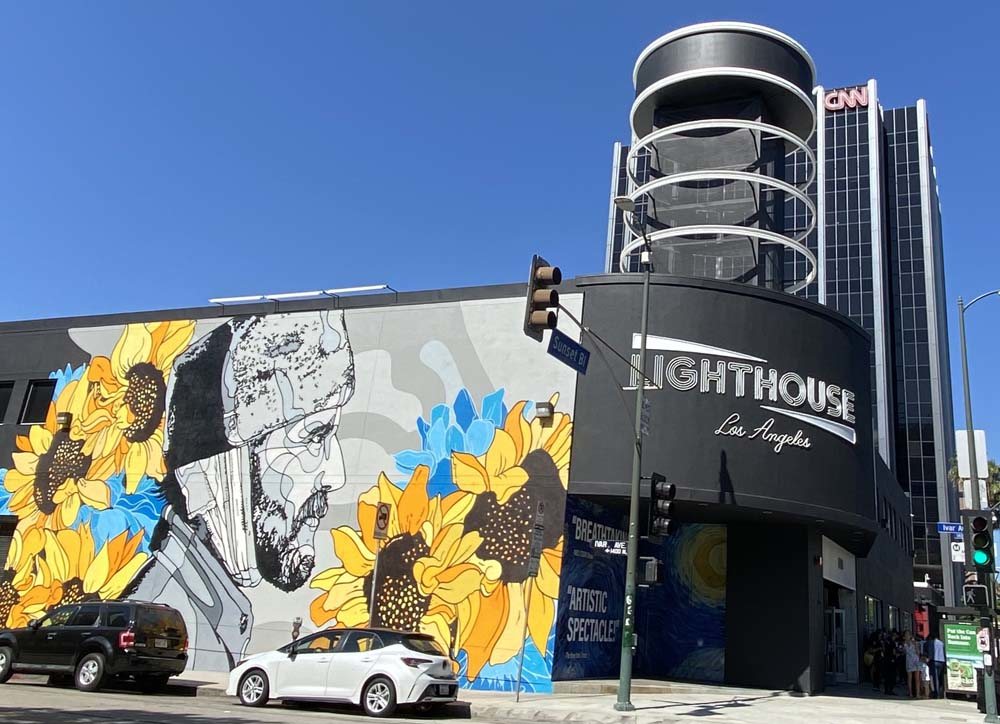 All Images courtesy of LAArtParty.com

On August 4, 2021, I attended a ribbon cutting and press preview of the “Immersive Van Gogh Exhibit” at the old Amoeba Records venue.  Councilman Mitch O’Farrell of the 13th district in Hollywood joined the collaborator/producers of this much anticipated installation. Co-producers Corey Ross (from Lighthouse Immersive), Diana Rayzman (from Impact Museums) and Councilman O’Ferrell spoke passionately about the iconic painter Vincent Willem Van Gogh, and what the project meant to them personally. Creator Massimiliano Siccardi zoomed in from Italy, while the latest collaborator – from the New York incarnation – Creative Director David Korins (“Hamilton,” “Dear Evan Hansen”) also spoke with us virtually. The desire for the public to understand the artist fully was a uniting theme for both of these men.

“Immersive Van Gogh Exhibit” is a collaborative effort brought to us by Lighthouse Immersive, Impact Museums and Massimiliano Siccardi, with his creative team – the talents behind “Van Gogh, Starry Night” (L’Atelier des Lumières), as seen in Netflix’s “Emily in Paris.” 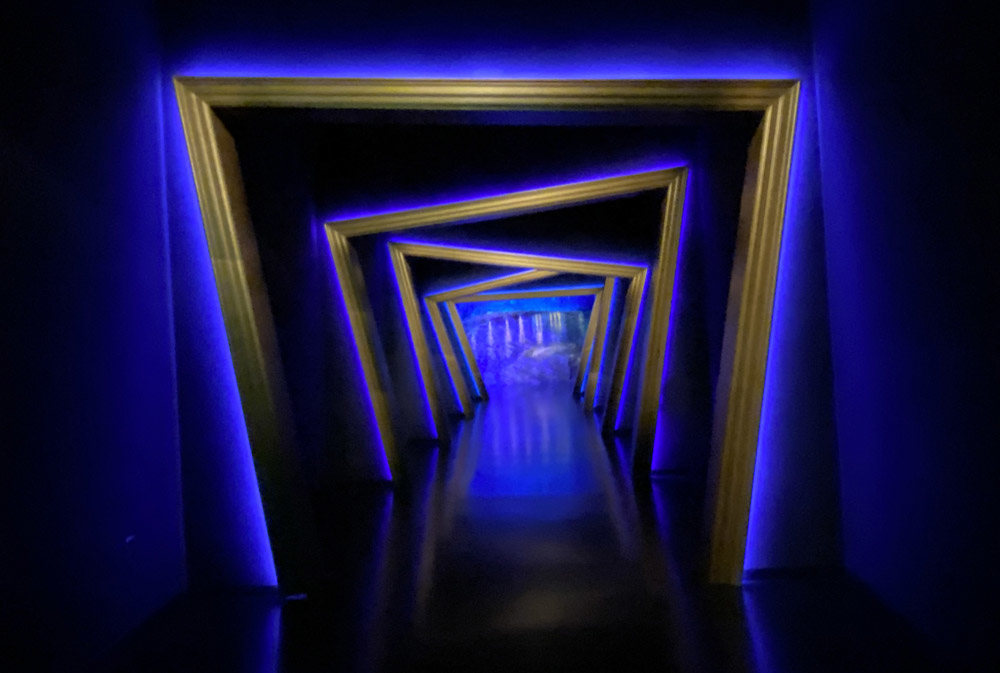 The world premiere launched in Toronto in 2020. Actress Lily Collins (“Emily in Paris”) was the first person to view the installation. Then in Chicago, George Lucas added to the hype, while in New York, Madonna, took the publicity flurry to the next level. The New Yorker Magazine even made a cartoon about it. The exhibition is scheduled to run in Los Angeles through January 2 (as of the publishing of this article).

As we were led through a neon corridor of arches I could not help but think of Van Gogh’s work “Corridor in the Asylum” (1889), painted during his last year of life, when he was institutionalized (by his own wish) at Saint-Paul Asylum. So many masterpieces came out of his prolific final year on this planet (Saint-Rémy series). The entry corridor led to the lobby, where a massive framed image of Van Gogh’s “The Portrait” (1889) loomed over the space. Keeping with the neon theme, one could not mistake the ceiling as an ode to the artist’s most famous work, “The Starry Night.” 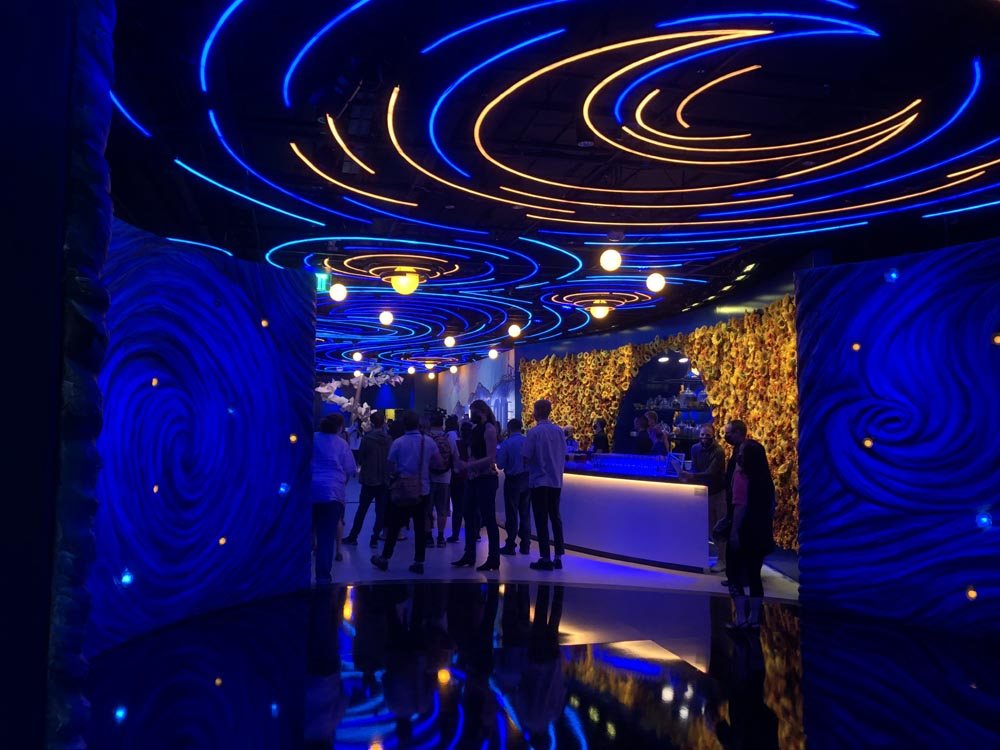 Across the room, the sunflower inspired snack bar drew quite a bit of attention, while straight ahead, just before the main galleries, was an unusual sculpture of letters. Van Gogh was a consistent letter writer during his lifetime. Most were written to his brother Theo, who also happened to be his life-long financial crutch. This was an interactive work utilizing AI technology. Using an app on your smart phone, visitors can ask a question of the prominent artist, and a letter will return. Both myself and the person attending with me received some sort of ramblings in response that had little to do with the question we asked, but it was a cute idea. 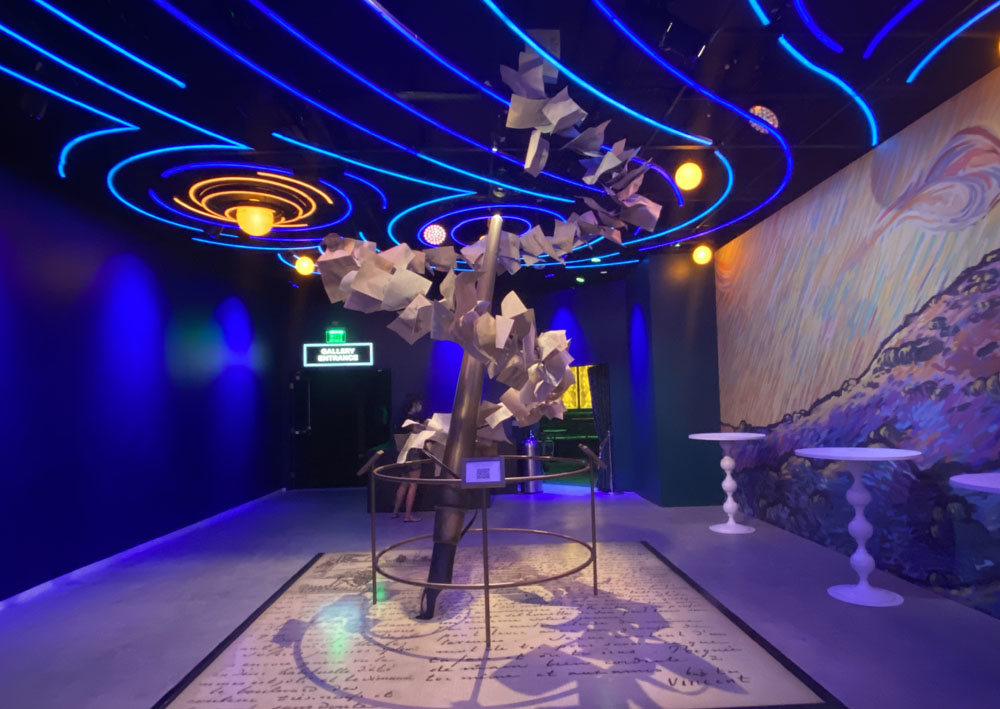 Now onto the exhibition…when you walk into the first room, it washes over you. You feel as if you are engulfed in the exhibit, like a wave takes you on a journey. The multi-media installation includes beloved paintings such as “Irises,” “Cafe Terrace at Night,” “Bedroom in Arles,” “Sunflowers,” and of course “The Starry Night,” all surrounding you in the form of dynamic towering projections, set to a crystal clear soundtrack. Within the physical gallery space, large mirrored sculptural monoliths, reflect the moving images, deepening the immersive experience.

I was immediately mesmerized with the first room. The reflective sculptures brought me inside the seminal and familiar art works as I stood within inches of the projections. I wondered why so many people were in the second room, as I took in the breadth of work in this first room. Of course, once I moved to the larger room, I realized why everyone was in there. In this room the entire floor was also washed with projected images, making the emersion even more complete. Now the entire floor became a part of the show. Ottoman-like seating was scattered throughout the cavernous room. I found myself spinning on one, without realizing it, as the image to the right of me morphed into a different one. As I craned to see it, that same image popped up to my left, while the right side immediately projected a new artwork. The gentle hypnotic video projections surrounding me created the illusion that I was witnessing a legendary work of art come to life before my eyes. I could see the brush strokes lay upon the canvas, the painful unrest combined with whimsical beauty (that the Dutch artist is so renowned for) washed over me as if I was the one with the brush in my hand. 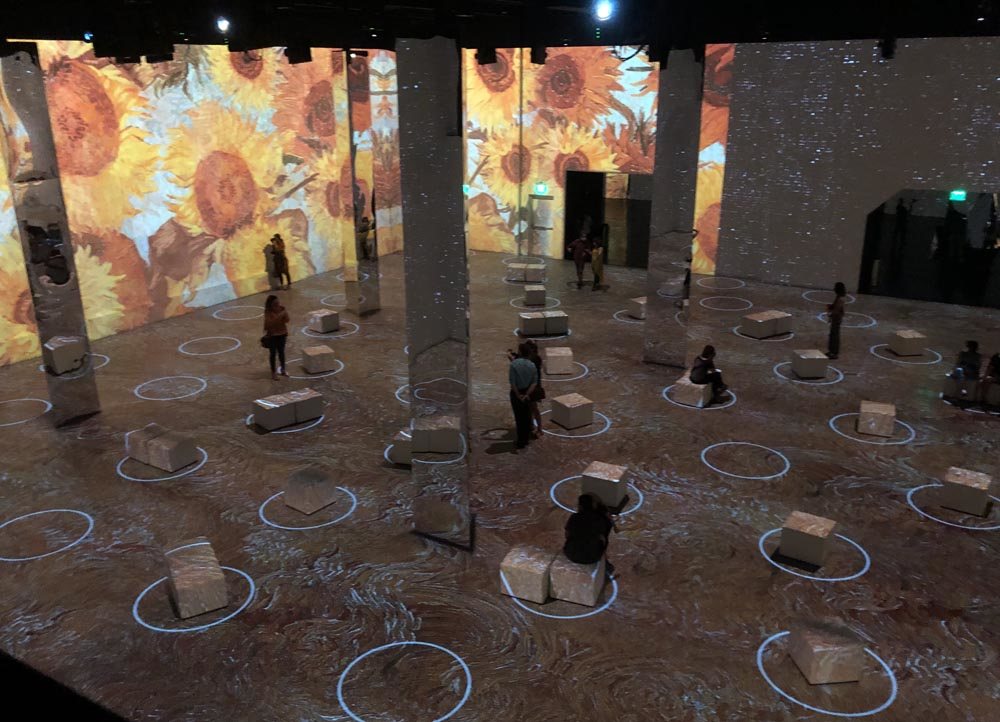 At mid-point, the images and the soundtrack culminate to align with Van Gogh’s turn towards color (inspired by his move to Paris). The images begin to brighten and blossom as the the artist’s signature sunflowers made their first appearance, joined by their iconic iris counterparts.

The narrative of Van Gogh’s life is prominent throughout the exhibition. His life informed his art. The highs and lows of his existence spilled onto his canvas. 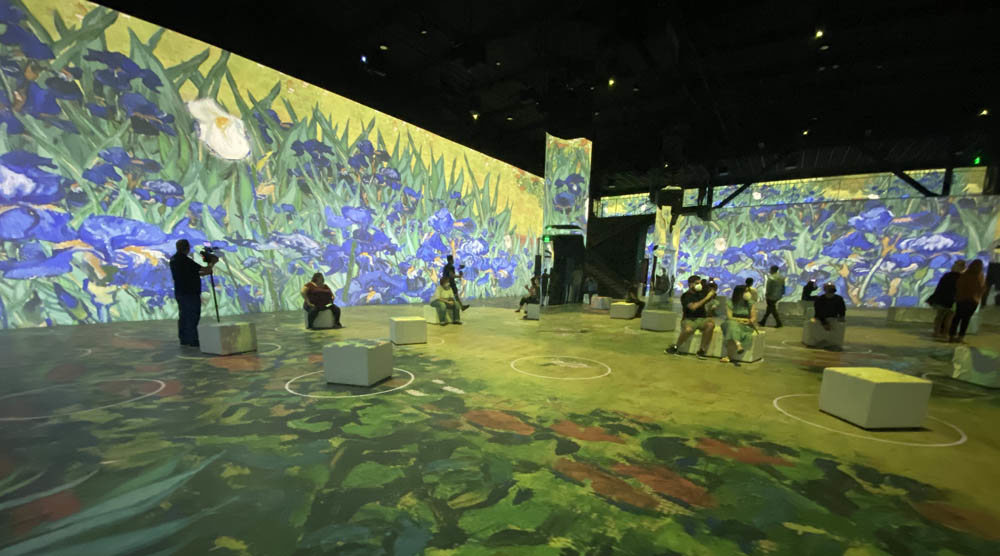 The 40 minute experience is broken down into animated segments, accompanied with a carefully curated soundtrack – a star player in the production. Luca Longobardi, curated an impressive soundtrack. It included recognizable classical works (Bach, Handel, Ravel, etc.), deftly arranged by Longobardi, who also composed his own pieces for the project. A wide array of popular music was part of the mix as well – from Edith Piaf’s well-known rendition of “Non, je ne Regrette Rien,” to music from Murcof (Mexican electronica), to Radiohead’s Thom Yorke.

Utilizing the old Amoeba Records space was important for this project. The enormous space not only allows for social distance, it works beautifully as a large-scale backdrop to Van Gogh’s memorable images. This blend of art and technology also engaged the architecture of the venue. This made me realize that attendees from each city where the exhibition is on view will have a slightly different visitor experience. 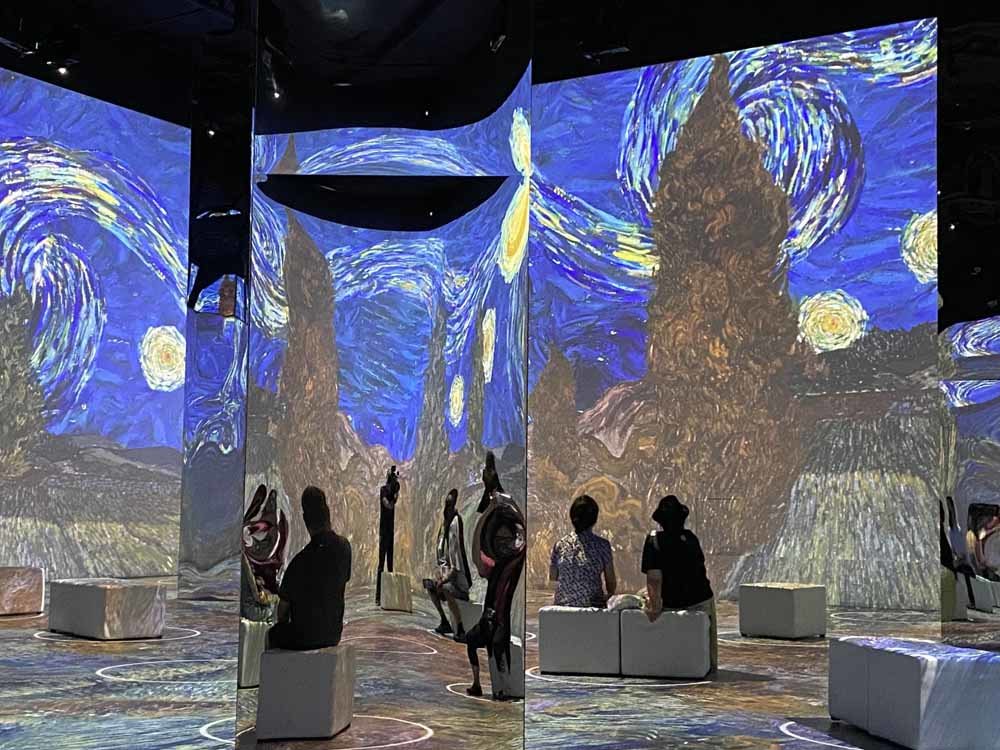 Be aware that several Van Gogh exhibitions (with very similar names) are all currently running now, and coming to cities across the world. I can only speak for “Immersive Van Gogh Exhibit,” which is featured in this review. This is a no-brainer, if you love art and music, it’s a must see. Art meets technology to celebrate the life of Vincent Van Gogh in a fantastical way! Visit the website for more info or to purchase tickets – https://www.vangoghla.com