d exhibit exploring dark fairy tales in her signature multimedia, collage and painted works. Rene Gagnon’s showing will take you deeper into Gagnon’s bold artworks using his “Post Graffiti Abstract Expressionism.” Morley will release a print the opening night, June 6, along with his exhibit of poignant typographic inspired work. Rounding out the four, Max Neutra will have 16 pieces, exemplifying his “ride on the line between mayhem and control.”

“These are four distinct exhibitions by four artists whose work touches the zeitgeist of today’s viewer.” – Jason Ostro, Curator

Essi Zimm – My biological father, a religious fanatic, claimed to know the truth. A woman’s value could be precisely calculated according to metrics of surface: dress, speech, piety, observance. My mother, a free spirited German, claimed her own truth. Beyond surface, there were things that dictated an individual’s fate: signs, symbols, curses, miracles. Being raised in a bookstore, I was imbued with many truths from the local UFO hunters, the psychics, the paranoid philosophers, the zealots, the hippies, all fervently declaring the objective truth to be found in their recommended codexes. These books were the saving graces of my childhood. With no other children around, I befriended the books and they became a catalyst to how I related to everything and everyone. They became my myriad of axioms.

Max Neutra- After spending five years developing his distinctive style while painting across Los Angeles and abroad, Max Neutra has made a name for himself as one today’s premier contemporary artists. He has risen to the international arena through sponsored tours across Europe and India, and has recently been awarded the first Guerilla Arts Foundation grant. Following his second consecutive sold out exhibition at C.A.V.E. Gallery on Abbott Kinney in Los Angeles, he continues to develop his art and explore new ways to bring his visions to the public. Riding the line between mayhem and control, Max creates images that are both chaotic and deliberate, each canvas an arena where chance and skill come together in a colorful fusion of iconic imagery. He has become known as an artist that thrives in a state continuous growth and experimentation, often employing new materials and technology. Utilizing his distinctive gonzo style, he explores the fading line between man and machine, the mysteries and methods of human communication, and the beauty and wonder of the natural world. 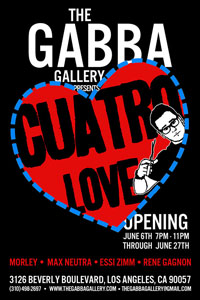 Morley- Morley is an LA-based street artist. His work has been featured in The Los Angeles Times, The Huffington Post, LA Magazine, TheChive.com, LA Canvas and on the television series Workaholics and Betas. His work has been shown in galleries around the world and he has lectured at numerous universities, the Los Angeles County Museum of Art and The Artisphere in Washington DC. Recently, he toured the country with his book “If You’re Reading This, There’s Still Time” (published by Cameron + Company in 2014) and was featured in the AOL original docu-series “Vicariously.”

Rene Gagnon- “I have always been considered a creative individual, but my first real devotion to the arts revealed itself during the mid-eighties when my thirst for creation exploded after seeing graffiti art emanate from the streets of New York City. The enormity of the works and the care free expression of color displayed a means by which I could gain the attention that every teen is so desperately seeking. This rebellious idea of searching for your identity through the use of markers and spray paint fueled my desire to follow in the footsteps of a graffiti artist. Twenty years later, I find myself back where I began.