The Contemporary Crafts Market (June 7-9, 2013) will be held all weekend at the Santa Monica Civic Center. See Sunday’s Events for more details. www.craftsource.org 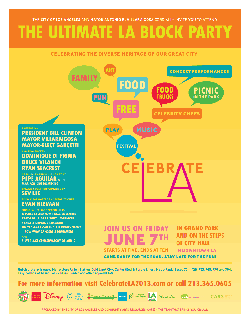 Plus a special appearance by Plácido Domingo, who will be performing an evening of Zarzuela and Latin American Music at the Dorothy Chandler Pavilion on Friday, June 7.

CelebrateLA! is free of charge and open to all. No reservations are required.

Please be aware of street closures for this event, including Broadway and Spring Street. 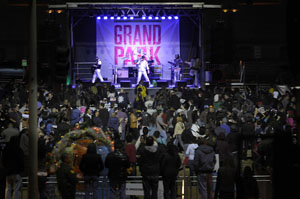 rand Park is easily accessible by Metro Red Line to Civic Center station. Parking is available. The main entrance will be at Spring Street and First Street. For information on how to get to Grand Park, visit http://grandpark.lacounty.gov/gettinghere.html. For more information on the event, visit http://celebratela2013.com or call (213) 365-0605.

What: Festival
Where: The steps of City Hall and Grand Park in Downtown Los Angeles, from Spring Street to Broadway, between First and Temple Streets.
When: 5:00 – 10:00 pm
Website: http://celebratela2013.com

his effort commemorates West Hollywood’s lasting commitment to raising public awareness and appreciation of the talents and abilities of all artists.

Juried by noted collectors Francisco George and William Escalera, “Out There” includes all types of media.

At the Loft at Liz’s treat yourself to a wine tasting, surrounded by art. The event is hosted in conjunction with the exhibition, “Oenophilia” which examines the rich cultural history of viticulture. Wine has been celebrated and stored artistically for centuries for spiritual rituals, religious ceremonies, medicinal purposes and social occasions.

Domodimonti is a boutique winery located on the picturesque countryside of Montefiore dell’Aso in Le Marche, Italy.

The experts at Robert Burns Wines of Beverly Hills will lead the tasting session.