Brekelle Lavee’ Long (Flower & Hewes, Palm Springs), team up to present “7 Extraordinary Artists,” a group exhibition which opened on April 9, at FABstudio. The duo met at the LA Art Show this past January and decided to work together. Bisciotti said there was an immediate connection and thought they could help each other. Long got involved with the LA art scene some twenty-five years ago. For the past five years, she has been putting together art shows and repping artists through her company, Art Vault Unlimited. 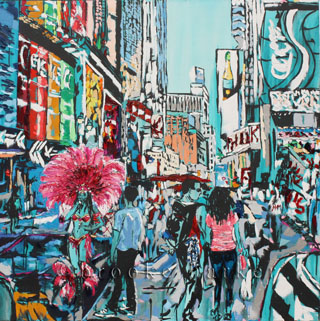 Harker just opened (April 2), in a show at Lu Martin Galleries in Laguna Beach. She was the featured artist. The exhibition will be on view through the end of April and features her coastal cityscapes. See http://lumartingalleries.com/

Harker said she is looking forward to showing her art at the Santa Monica gallery. She has previously attended art receptions a the gallery was hoping to be a part of an upcoming exhibition.

Directly after the run of the exhibit, Harker will head to Italy for a four month stay, where she will paint for the next several months to create works for her scheduled solo exhibition in August. Her exhibit titled “An Eclectic Perspective/ Una Prospettiva Eclettica” will be on view at the Villa Comunale di Frosinone in the vicinity of Rome as part of the Festival of Contemporary Visual Arts. http://www.brookeharker.com/ 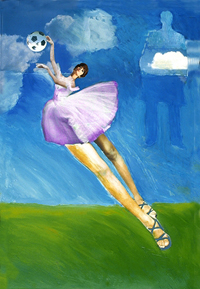 os Angeles artist Barbara Kosoff started her art career as a graphic designer and art director which led her to working in mixed-media.

One of Kosoff’s works, The Amazing Catch will be featured in the group show. “This piece was inspired by a memory I had as a young teenager in summer camp where we played a game called Newcomb. The game is played by throwing a volleyball back and forth over the net with each team trying to get the other team to miss the ball. With my height and competitive spirit, no one could get the ball passed me – this gave me a feeling of empowerment.”

For more info about Barbara Kosoff, visit her website at http://BarbaraKosoff.com 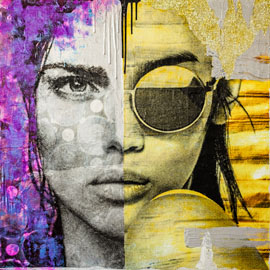 “My favorite subjects are beautiful faces” said Galleani, a former fashion photographer who has lived in the Arts District of downtown Los Angeles for 25 years. “However, I have always loved the way posters affixed by street artists look when they became torn and weathered out. And I am particularly fascinated by the way dripping paint seem to adorn them, so I have decided to incorporate some of these elements in my pop art.” http://Galleani-Art.com

Canadian born artist Jennifer Verge came to Los Angeles five years ago. “It was exciting, L.A. seemed ‘Larger than Life,'” said Verge. “LA was filled with so many interesting people (Good and Bad) Obama was running for President. Change was everywhere. It was one of the most amazing times of my life!!!” 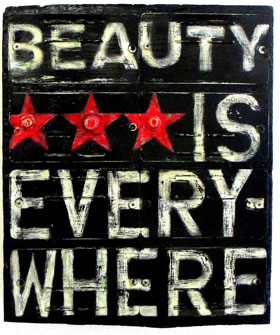 Unlike most artists, she does NOT start with a canvas. She said she tried using canvas for years, but it never quite felt right. She added, “Then I said, the Hell with it and painted on panel, and I’ve never gone back”

Starting with a wood base, Verge adds found objects, along with stain, metals and plaster. The artist relies heavily on symbolism, using catch phrases while drawing from her positive outlook on life. “I try to do something everyday…which may not mean putting a paint brush to panel,” said Verge. “But it’s more about ideas, keeping your inspiration and imagination alive, trying to figure out what you have to say in a new and innovative way.” http://www.jenniferverge.com/

Growing up in Southern Indiana, artist Charlie Patton was first inspired to create art by his first grade teacher. At 92 years old Emma Schultz was a vibrant Impressionist painter who nurtured Patton’s love of art into full bloom at a young age. 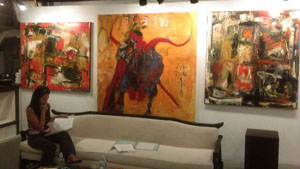 To this day, Patton is still creating. His has worked in several styles such as Abstractionism, Impressionism and Mixed Media.

Andrea Borgen has been working with FABstuido to create a truly special culinary and art experience. She recently founded barcito, an Argentine-inspired shareable plates bar. Borgen has agreed to do the next dinner at FABstudio with guest chef (and Argentinean) Augustin Mallmann on April 18.