Le Salon de Musiques performed the first of their eight concert program for the 2012/2013 season this past Sunday. The series highlights Romantic and Neo–‐Romantic movements and this concert featured the United States premiere of Lyapunov’s, Piano Sextet op 63 as well as Glinka’s Serenade for Piano Sextet on Themes from Bellini. The venue of the Dorothy Chandler Pavilion Fifth Floor Salon allowed audience members to truly appreciate the acoustical qualities that an intimate salon setting offers. 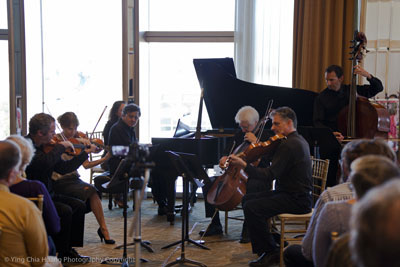 rogram began with curator of the series and artistic director, Francois Chouchan and musicologist Julius Reder Carlson providing an introduction to salon music and historical background. Carlson’s discussed how by removing the stage, barriers between artist and audience are broken and a deeper sense of relationship with the music is created.

A high point for me was during the Lyapunov Piano Sextet Op 63, when the cohesive and seamless transition from the second to third movement had me in awe of the aural dimensionality created by the musicians in the space.

After the performance, each audience member received a flute of French Champagne preceding the question and answer portion of program. The musicians explained the historical relevance of their instruments, many of which
dated back to the 18th century, as well as talked about their personal reflections on their careers, influences and preferences in music. The easy going candor and humor between audience members and artists evoked a very real sense of community that only a salon setting can offer.

Following the Q and A, Patina’s catering service provided a gourmet high tea buffet as audience and performance members mingled in the afterglow of this most enjoyable Sunday late afternoon musical experience.

The remainder of the eight concert series of Le Salon de Musiques will continue the tradition of classical sophistication on the second Sunday of every month through May 2013 from 4-6 PM and will include performances of Bach, Debussy, Schubert and Schumann.