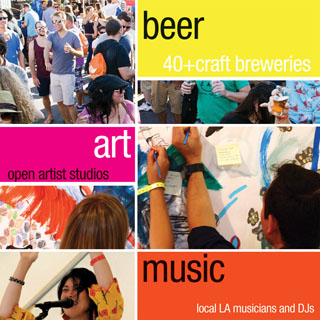 The festivities surrounding the venerable 18th Street Arts Center’s 25th Anniversary Weekend continued with the 5th annual BAM Fest, which of course means beer, art and music. Could there be any better combination?

The crowds were out on a beautiful afternoon for this raucous event, which supports the
Arts Center, which fosters dialogue between the public and local, national and international artists.

Saatchi Art Gallery had a group show, including pieces by Laddie Hohn Dill and Mike Mollett’s “Issue of Remembrance: A Woven Archaeology.” (See right) All were for sale to benefit the Center.

Also, Saatchi presented short informational presentations called Crash Courses” given by artisanal beer, wine and spirits makers, along with samples of several craft brewers, including wines by ‘Wine Enthusiast’ and and home-brewed sodas by “Maltese Falcons.”

Francis went on to say that the reaction from the community has been remarkable. “Business owners and beer lovers have welcomed us with open arms. First, because we are true to our name. They love to hear that our beer is brewed locally. Many breweries simply use the name of a geographical area, and brew their beer elsewhere. Not us. Second, because people love the taste of our different styles of beer – – we have something for everyone. Third, the business owners appreciate us because we provide a great service to them – – there is no middleman delivering our beer. We service our business customers ourselves.”

Founder Lynne Weaver of Three Weavers Brewery Company had an idea to build a community through beer and brought in brewmaster Alexandra Nowell. A new tasting room recently opened in Inglewood. 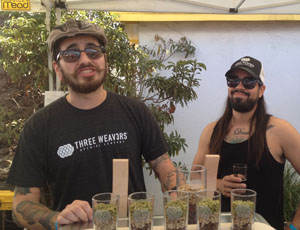 “The response to our beer has been amazing,” said brewer, Chris Gonzales who was on hand at the event. Two tasty beers were available…a session IPA, named Stateside and an Imperial Stout, named Midnight Flight.

Michael W. Barnard, a visual artist, filmmaker and musician was one of many who opened his studio for interaction with the attendees. Yujun Ye, from Taiwan also presented her eery, clever comment on contemporary culture, east to west. 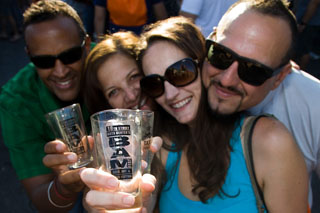 Each of these interesting acts got the large crowd moving!

One could also purchase beer and art themed t-shirts, hats, coasters, pins, jewelry, stickers- you name it, even a breathalyzer!