Director/Producer John Stark brings his newest play to life “Tom, Dick and Harry Meet Mary” at the Odyssey Theatre. The opening night performace was a huge success.  The show runs through December 23rd. 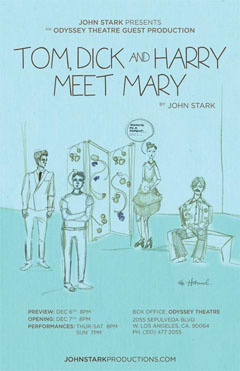 a man on-the-road, influenced by Jack Kerouac. He is a left over from the Hippie generation. Disillusioned with the life he was leading as an office worker for Xerox, he wanders about seeking an answer to the riddle of life, hoping to meet someone that sides with him. Finally he spots Mary on a website and calls on her. He meets her and hopes to develop a relationship. He tells her he is trying to write a book about the decay of American life. He hopes Mary will help him put down the rich and famous. Dick is a former army soldier. He has deserted the army after he was ordered to serve in Iraq. He sees through what America is trying to do throughout the Middle East. Under the pretence of spreading freedom and democracy, the American goal is economic control.

He wants to return to a simple life. No material attachments; no cars that pollutes the air; just a bike he will get around on like Lance Armstrong did. Dick is suffering from cancer but he is determined to conquer it with fresh air and exercise. He invites Mary to take a bike ride with him. He flatters her, telling her she looks much younger than her website picture.

Harry is a lawyer who left his practice after dealing with nothing but deceitful criminals and husbands who betrayed their wives, then refuse to pay alimony. He hopes that Mary is someone that is honest and truthful – someone that he can trust and love. Mary is a nun who has left her convent, where she felt isolated from society- lonely and depressed. And she has lost her faith. She tries to pick the right man from the three that visit her apartment, but when the men discover that she is seeking a relationship with all of them, jealousy and rage erupt.

Mary realizes what hatred she has created amongst the men. She reminds all them that “hate is the seed of death in your own heart, when it seeks the death of the other, while love is the seed of life in your own heart when it seeks the good of the other.” She then goes behind a screen, and puts her veil and gown back on. The men are stunned. They forgive her. Their jealousy subsides and Mary returns to her convent, a born again Christian.

Starring as Mary is Donna Luisa Guinan, whose most recent appearance at the Odyssey Theatre was in Night song For The Boatman by Jovanka Bach, produced and directed by John Stark. After a successful premiere at the Odyssey, the play had an equally positive response off –Broadway at the Barrow Group Theatre in New York. Donna was also featured as the leading lady in Mercy Warren’s Tea by Jovanka Bach at the Odyssey.

Tickets: $18.00; Students and Seniors: $15.00; Performances are Thursdays through Saturday nights at 8 p.m. and Sunday at 7 p.m.This is a limited engagement.