Meet Ocean photographer Ben Thouard. At any given moment stunningly beautiful waves are exploding over reefs and onto the shores of beaches around the world. These miracles of creation form far out in the ocean then reunite with their source in the most majestic way possible once they reach a shallow reef or land’s edge. This happens countless millions of times each day, but we can only glimpse the exposed aspects of the process…unless we happen to be Ben Thouard. Ben is one of the most innovative ocean photographers in the world. He’s pushing all kinds of technical limits while helping elevate water photography to a fine art…capturing perspectives most of us can only see by looking at his work. 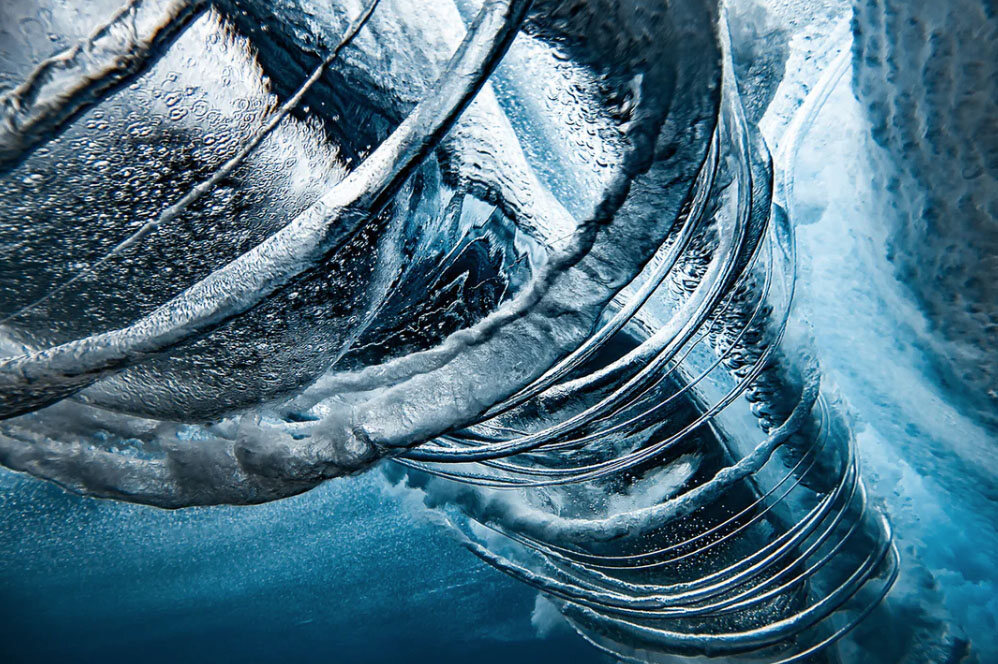 The hydrodynamics of a powerful Tahitian wave as it breaks over a shallow reef is masterfully captured in Ben Thouard’s “Vortex,” an image which reveals an array of qualities most of us never knew were happening just below the surface of the waves.

While gorgeous waves are being born and dying on a constant basis all around the globe, Tahiti is the destination Ben selected to master his process of photographing waves from the underwater perspective. This makes sense not only because of the crystal clear water and epic surf, but because Ben was born in France; and Tahiti is in French Polynesia. That said, those who understand how these waves are formed and why they are so beautiful would never have considered selecting Teahupo’o Tahiti as the place to shoot from underwater. While Teahupo’o is one of the most photogenic waves imaginable, it is also one of the most dangerous. 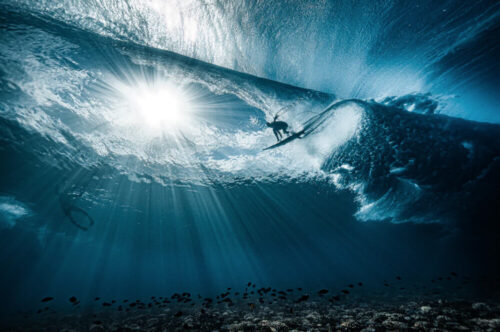 The aesthetic of Ben’s “Underwater World” makes this wave look serene, but it’s a whole different story from the other side. The energy which creates the tube with the surfer inside is extremely intense. Miscalculating his timing and positioning could easily result in tragedy.

When you see above water photographs of the waves at Teahupo’o, the last thing you think of is a human being freediving under the water just behind the wave. This is a wave so powerful that the name is said to mean “the place of broken skulls”. Shooting from the underwater perspective was something Ben knew held tremendous potential, and you can be sure he would not have taken the risk unless he knew what the results would be, once he perfected his technique. Extraordinary one-of-a-kind images was one result. A National Geographic book was another. Sold out books and limited-edition prints is rapidly becoming another. 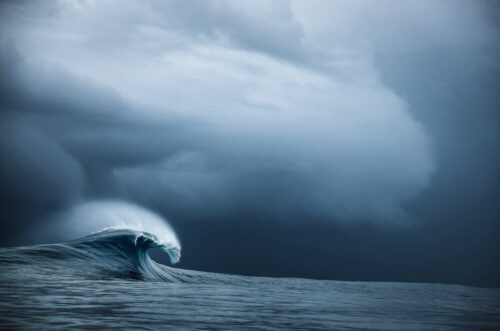 “Animal” has aesthetic qualities which make it far more than just a beautiful picture of a wave. It is a fine example of how a single frame, captured by a passion-driven image creator, becomes a work of fine art.

When you look at Ben’s portfolio, you see that he has mastered shooting from more commonly photographed perspectives. His above water images are elegant works of fine art photography. While many photographers are experimenting with photoshop composites, cutting pasting and layering, a single frame from Ben’s camera roll makes you feel, contemplate and experience a sense of wonder. Not everyone will take the time to truly appreciate a great photograph. Those who do however find that observing a single moment frozen in time is a great way to really see the subject. With his extraordinary works and great accomplishments, Ben Thouard has given us all a way to appreciate the kinetic moving wave sculptures frozen in time for eternity. Hang one of these prints on your wall, and remind yourself at a moments glance just how miraculous Mother Nature truly is. Visit the artist’s instagram at https://www.instagram.com/benthouard/ (@benthouard) or his website for more info – http://benthouard.com

About the Author: Richard Bilow