Skip to content
Art Galleries Get Inventive Amidst Uncertain Times

Art galleries have always had to fight to survive…with rising rents, economic instability, and consumer cut backs, galleries are forced to think outside the box. Beyond the Lines Gallery (previously located at Bergamot Station in Santa Monica) and ShockBoxx (an art gallery based in Hermosa Beach) are doing just that. 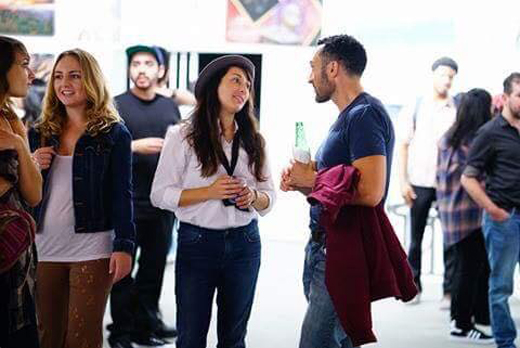 Gallerist Brittany Davis at an opening at Beyond the Lines ; photo courtesy of gallery

Mike Collins, artist and co-owner of ShockBoxx, first met gallerist Brittany Davis when he exhibited in a pop up exhibition curated by Davis in Echo Park in 2016. Davis went on to open a gallery at Bergamot Station in Santa Monica. Due to ownership changes at the Santa Monica art center, her gallery, Beyond the Lines will be moving to a downtown location (1150 E 12th Street Los Angeles 90021 Unit A) later this month. In the interim, Davis will be co-producing and co-curating the “Miniature Show” with ShockBoxx. Davis said she is excited to collaborate with co-owners Mike Collins and Laura Schuler since the exhibition received so much attention last year at Bergamot Station. “I loved the variety of works I was able to pull together from the artist community. Each wall had a flow of styles that pulled together nicely once I was curating the pieces.”

Co-founder Laura Schuler is also an artist who met Davis in 2015 when she was curating a pop-up show in Glendale. “I was really impressed with the scale and depth of the show she put together that weekend and it’s been awesome to see her take that concept and bring it to a gallery space over the last few years.” 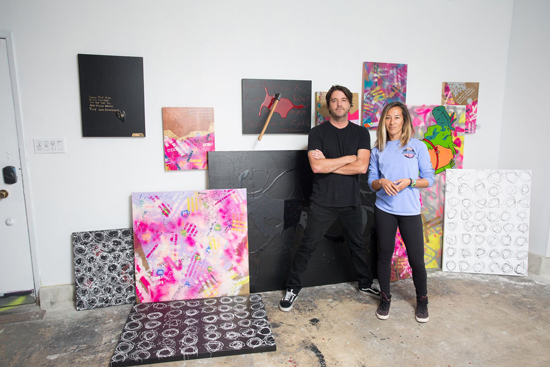 Collins said Davis played a major role in his growth as an artist. “I had only been showing locally and wanted to break out of the…’same town, same artists, same show,’ trap. I applied to one of her pop-up shows in DTLA and was accepted. I think it was the last pop-up she put together before moving into Bergamot. Brittany is the best…a total ambassador for emerging artists and just on fire. She doesn’t stop.”

Both agree that they were excited to partner with Davis on this project. This will be the first time for all parties to collaborate in such a way. Schuler said, “Our exhibition formats are fairly similar and we think it’ll be a great way to promote Brittany’s new gallery space to artists in the South Bay area.”

Alvaro A.S.F will be doing a live painting to Mozart piano concerto No 21 during the reception The artist boxes himself in a 10’x10′ square foot surrounded by transparent plastic, as to not splatter paint across the gallery. He explained that his body becomes the art along with his clothing (the jeans, individual shoes, shirt an so on). 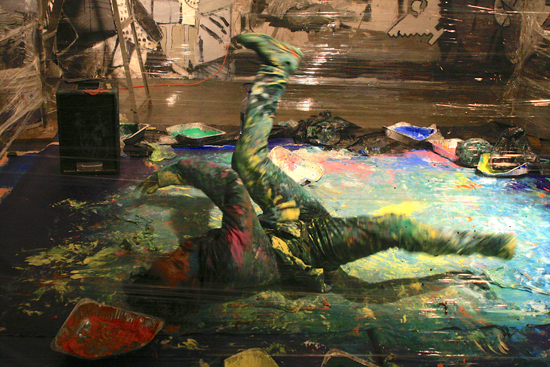 Alvaro A.S.F. paints with his body; photo courtesy of artist

“I do not call it a performance or dance, but a response to the complexity of the classical notation of Mozart’s Piano Concerto No. 21.” Ceramics sculpture, print-making, oil, acrylic, found object, photography, video art are just some of the various media that the artist works with. http://alvaroasf.com

Artist Noelle Kraus has participated in a number of exhibitions curated by Davis since 2016. She will be exhibiting four works from a twenty-four-piece series. “The pieces are part of a colorful psychedelic fluid art series I created in 2017.” Kraus explained that she enjoyed exploring a new technique during the process. “Working on this fluid series demands undivided attention, and really being in the moment.” The four works are all 6″x6,” acrylic on canvas. https://www.jrkraus.com/

Since all three gallerists are also artists, they truly understand the plight of the artist, and agree that collaboration is key to having a successful career in the art world. Davis has a background in teaching artists how to treat their art as a business. She has held classes at her Bergamot Station gallery and will continue to teach ‘How to Succeed as an Artist’ workshops in her new downtown gallery located at Beyond the Lines, 1150 E. 12th St., Unit A, LA, 90021. Visit the website for additional info at https://beyondthelinesgallery.com