Kayne Griffin Corcoran celebrates two solo exhibitions by Peter Shire and Mark Handforth. This will mark Shire’s debut presentation with the gallery and will consist of ceramics, furniture, and works on paper.   Born in the Echo Park neighborhood of Los Angeles, where he still lives and works, Shire is an institution unto himself. His work can be found throughout much of Los Angeles as Shire is very much imbued with the city’s ethos. A prime example being his installation “Angel’s Point” which sits atop Elysian Park along the Chavez Ravine overlooking Dodger Stadium and Downtown—encapsulating Los Angeles from a post-modern vantage point among the palm trees, smog, and other Los Angeles landmarks.

Shire’s self-proclaimed love affair with clay started early on, but was grounded by predecessors who had started to experiment with fired-clay sculptures already in the 1950’s and 60’s—artists like John Mason, Ken Price, and Peter Voulkos who were all engaged with liberating the medium from its practical use. For Shire, however, practical use was not a disservice to the medium. His interest in Pattern and Decoration, a movement from the 1970’s and 80’s, brought to his work an amalgamation of decorative and folk-art traditions. Shire himself refers to his own style of work as “California high kitsch”—a specific kitsch that is able to mold and grow with the modernism that is already at hand within the Los Angeles landscape.

Also opening tonight…Zig, Zag & Flag, the gallery’s second solo exhibition of works by Mark Handforth. The exhibition will include three new sculptural light installations and a large-scale site specific flag pole situated in the courtyard of the gallery. Handforth is well-known for his large-format and medium-sized sculptures. Using familiar objects such as lampposts (his first iteration created in 1999), telephone booths, vespas and flagpoles, his work is often a reference to the urban landscape. The artist’s poetic transformation and distortion of the scale and proportions of these objects into sculpture speaks to the identity of the object and its ability to evolve. They reveal something new about the ways in which these things exist and function in our everyday lives. Far from adhering to any rules and restrictions, they form the basis on which a flow of associations can be built. 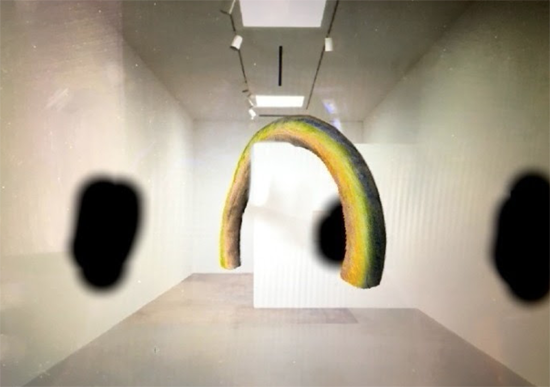 Born in Hong Kong, raised in England, and based in Miami since 1992, Handforth revels in the skewed perspectives and unintended consequences that result from cultural migration and displacement. His sculptures are a direct response, and at times a critique (i.e.; the twisted flagpole), of the complexity of civilization on earth and life beyond.