Skip to content
Review: All About that Bass…at the Angel City Jazz Festival

Four of the most innovative bass players in Los Angeles came together for Extreme Bass Night at this year’s Angel City Jazz Festival which that took place in Santa Monica at The Edye at the Broad Stage. Each one of these masters demonstrated their virtuosity while showcasing the outer reach of the bass’ musical range. 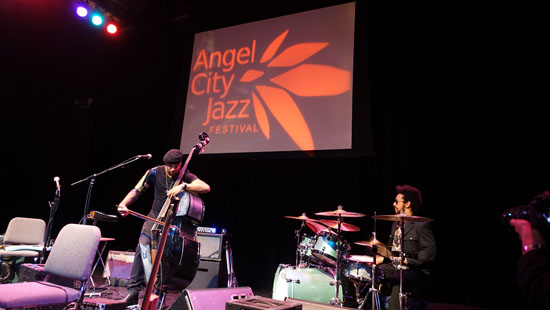 The evening began with Mike Valerio, a veteran musician who can be heard on hundreds of television and movie scores. Mr. Valerio’s solo set began with an impressive version of one of the Fugues from Bach’s Well-Tempered Clavier. Then, he mentioned that he was in the studio recently with John Williams and proceeded to play a solo from that session that highlighted his brilliant classical and jazz chops. However, the highlight of the set was a version of Paul Simon’s 50 Ways to Leave Your Lover. The song began with the musician creating a beat by banging on his bass. He then looped this beat, began slapping away at his bass and sang the song with a very strong, impressive soulful voice.

The second set featured the sonic experimentations of contrabass guitarist/composer Steuart Liebig who uses an extensive collection of pedals to create layers of sound that expand his sound palette. Mr. Liebig used brushes, mallets, cymbals, socket wrenches and other oddities to create unique musical textures. Though trained on the upright double bass, Liebig plays the electric six-string model – the contrabass guitar. The extra strings allow for more chordal possibilities in addition to being able to go lower and higher. Although at some times, it may have been challenging to hear, there was no doubt that Mr. Liebig’s knows what he’s doing and has a lot of fun doing it! 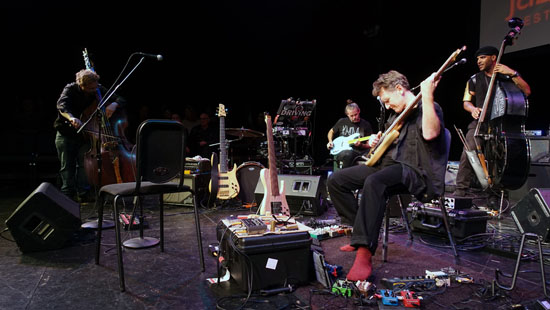 After a brief intermission, Tim Lefebvre’s set showcased his avant-garde jazz/funk credentials. He has played with Tedeschi Trucks Band (his full-time gig), Chris Botti, Toto, Sting, Uri Caine and Donald Fagen. He’s also one of the last bassist to record with David Bowie – his bass work is featured on “Blackstar.” Mr. Lefebvre played a stylish looking, vintage, light blue Fender Jazz bass throughout his set and after a brief solo offering, beats wizard Troy Ziegler and keyboardist Rachel Eckroch joined him. The trio’s evocative set over a civil rights speech set up a tension filled jam session that featured high pitched bass and keyboard solos that didn’t stretch too far and always found their way back to the beat.

The fourth bassist to grace the stage was Miles Mosley – the bassist/co-founder of West Coast Get Down – the well-known collective of musicians that have put Los Angeles jazz on the map through their recent world tour with Kamasi Washington. Mosley has toured extensively across the globe with many artists including Lauryn Hill, Mos Def, and Herbie Hancock. He has successfully combined bow work, effects, and ‘in-your-face’ dexterity to give his instrument his own signature sound. He was joined on stage by Tony Austin – another member of the collective whose creative drumming is such a pleasure to hear and watch. These two musicians have been playing together so long there chemistry is unique. They are always locked in with each other creating a never ending groove that makes your head bob. The set featured a smoking version of Jimi Hendrix’s “Voodoo Child,” which was followed by Mosley’s original “Abraham” – a brand, new single that is out now and will be featured on his new album in January 2017. 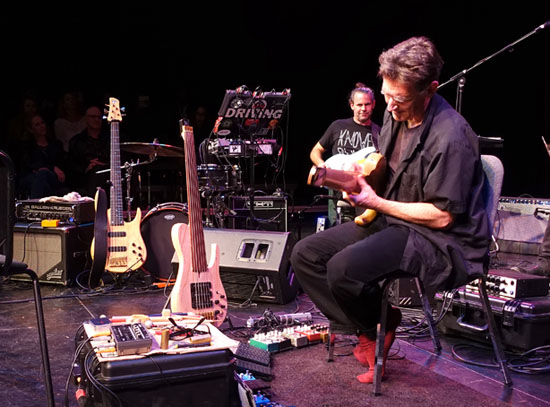 The night concluded with all four bassists along with their collaborators taking the stage for an experimental jam session where each bassist tried to outdo the other by seeing how many weird and wonderful sounds they could get out of their instruments. Of course, they threw in plenty of traditional shredding solos. In the end, it was clear that these guys all have the ability to uniquely communicate their expressions through the bass and to musically think “outside the box”.

The Angel City Jazz Festival has consistently featured the most innovative and original national and international jazz musicians working today and hats off to them for putting together an adventurous night of improvised music. I can’t wait for next year! Find out more here: http://angelcityjazz.com/ http://www.thebroadstage.com/