Good Boys at the Pasadena Playhouse is a probing and psychological drama about what happens in and around a private, prestigious Jesuit prep school for boys, Saint Joseph’s Prep in the Washington, DC suburbs in 1988. Though the play, written by playwright Roberto Aguirre-Sacasa (writer of the TV drama “Riverdale”) debuted in 2008, it is now more relevant than ever as it relates and focuses on issues of male privilege, toxic masculinity and responsibility that are currently in our country’s consciousness with the #metoo movement and particularly the Kavanaugh hearings. 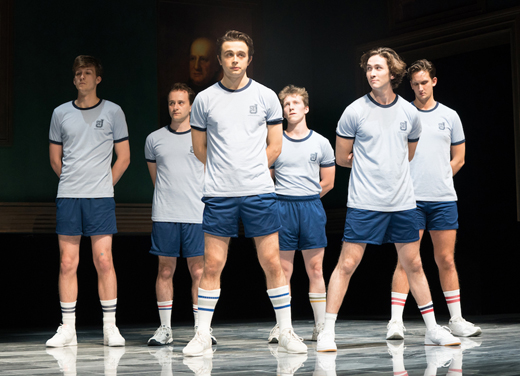 With powerful performances by Ben Ahlers (NBC’s “The Village,” CBS’ “Instinct”) as Brandon Hardy, a promising, handsome and popular senior headed for Dartmouth, and Betsy Brandt (“Breaking Bad” as well as “Life in Pieces”) as Elizabeth, his mother, we are drawn into the drama between Brandon and his mother, Brandon and his best friend, Justin Simmons played by Dylan Arnold (“When we Rise,” “Mudbound”) and also the conflict between Elizabeth and Coach Russell Shea, Brandon’s football coach and longtime friend of his parents played by James Carpinello (“The Enemy Within,” The Gifted”).

There are also solid performances by Toks Olagundoye (“Castle,” “Veep”) as Elizabeth’s longtime friend from school days and Brett Cooper (Paramount “Heathers” and Fox’s “Shots Fired”) as Cheryl Moody, the girl in the video tape, who is pulled into the scandal and is very convincing as a naive, needy and conflicted young woman.

A videotape has been found on campus, showing two students having sex. On the tape, the boy is brutalizing the girl. He looks like Brandon from behind but it is not clear. His mother vigorously denies that it’s Brandon. Brandon vigorously denies that it’s him. Elizabeth searches for the truth and while doing so, reveals family secrets that she’s long ignored, involving her husband, a former student at St Joseph’s Prep. As the drama unfolds scene by scene, we are pulled into a world of scandal, cover ups, complicated and twisting turns, and learn of the history of Saint Joseph’s and the culture of deception, entitlement, and violence it cultivates from generation to generation. 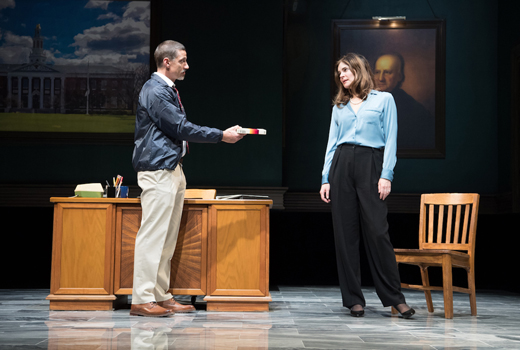 Thoughtfully directed by Carolyn Cantor, the action is swift and each scene is punctuated with heightened music. The scenic design, by Dane Laffrey, consists of a hunter-green and dark wood background on which hang larger-than-life-size portraits of the current and former heads of this Jesuit school. The costume design by Sara Ryung Clement, lighting design by Elizabeth Harper and sound design by Dan Gower all work very well to weave together this gripping tale.

Good Boys is a very thought-provoking play that will leave you wondering and asking: What cost will we pay to protect the ones we love?