Manual Cinema’s Mementos Mori delighted the audience at The Broad Stage with a multi-media experience that magically integrated the performances of live actors projected as shadow characters, video produced scenes, and the skillfully precise choreography of shadow puppets, and accompanied by live musicians. As we followed the story-line projected on a large screen above the stage, we could simultaneously see the creative players move around the stage, transforming the imagery on screen, and thus also give us access behind the “wizard’s curtain.” 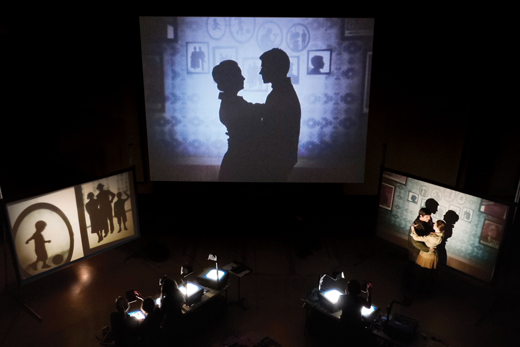 The 90-minute performance, which had no narration, felt like watching a mash-up of classic silent film, film noir, and a contemporary graphic novel come to life. The story, Mementos Mori, a Latin phrase meaning ‘remember you must die’, has the specter of Death, portrayed as an attractive woman, interact with a succession of everyday people including a taxi driver, bike courier, a film projectionist, an elderly grandmother and a seven-year-old girl, as they confront their mortality. Scenes take place in a modern urban landscape, where Death grapples with her iPhone application called “Reapr” and the summoning of her Scythe that often has a “mind” of its own. Punctuated with such moments of comic relief, we follow the characters as they come to terms with the inevitable. With a nod to Ingmar Bergman’s “The Seventh Seal”, scenes depict the grandmother play and win at a chess game with Death over a period of years and so forestall her fate. Death also finds herself side-lined with a romantic “danse macabre” interlude with the projectionist and along with the loss of her iPhone produces a unique downturn in her doings until the balance of life and death eventually returns. 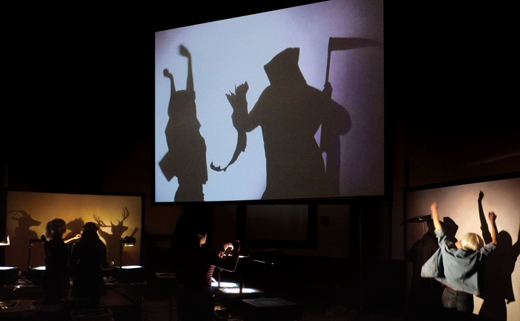 To learn more about Manual Cinema, go to https://manualcinema.com/