Skip to content
Review: Ezralow Dance: Primo Passo at the Wallis Annenberg Center for the Arts

Los Angeles native Daniel Ezralow returned to The Wallis to premiere Primo Passo – Italian for “first step” – a career retrospective of his investigation of intentional movement and exploring the question of “why do we do what we do.”

Erzalow’s works are energetic, visceral and physically explosive and affected me in a way that, during a post performance Question and Answer session (which, the way, is a wonderful part of these performances at the Wallis) describes as “neuron mirroring”, meaning we, the audience, experience in our bodies what the dancers are doing with their bodies as we watch them perform on stage.Throughout the performance that also had a feeling of “other worldliness”, with the often darkened, spot lit, shadowed and flickering stage, we hopped, slid, tumbled, and ran in a joyful and playful. 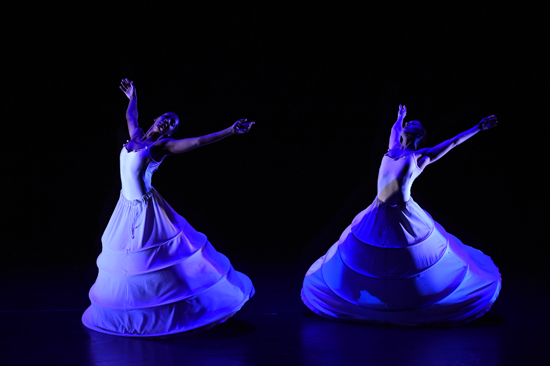 The evening opened with a Prologue that had a small shadowed figure move within a TV screen showing Black and White images from 1960’s shows like the Twilight Zone and Addams Family and with cameos from seminal news anchor Walter Cronkite.

With four weeks of intense rehearsal, the diverse and highly talented performers with dance backgrounds in avant-garde and commercial, ballet and hip hop, modern and street, gave it their all as they pushed beyond their own limits to entertain and pull us in to Erzalow’s vision. The works performed included: Brothers (1982), a duet homage to being and having a brother with the dancers jostling with each other in strength and playfulness to Igor Stravinsky’s Concertino for Twelve Instruments.

Foreign Tails created by ISO Dance Theater in 1985 with music by Claude Debussy evokes a magical rural environment where the hoop skirts of the two female dancers become transformative entities with which they are their two male partners interact , disappear and emerge from with whimsical and highly inventive engagement.

SF (2004) has the whole company move and jump to the wide range of taken-for-granted simple movements that are unique in each and everyone one us.

Awakening Solo, accompanied by live music by Jaschim Cooder on mbira and nail violin, featured Athea Young, who is the company’s Dance Rehearsal Director and performed in five of the seven pieces. 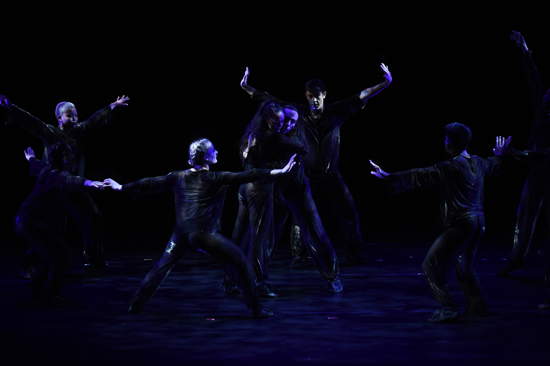 Pulse (2000), with music by David Lang, original lighting design by Ryan O’Gara, and shimmery almost transparent costumes by Jackson Lowell, had the dancers slide repeatedly across the stage, magnetically connect with a partner only to snap apart as if they were molecules in some whorling ether.

See below image of Chroma (2013), choreographed to Strauss’ Blue Danube Waltz had the dancers changing from initial mutli-colored American Apparel garb to evolve into sharing pieces to each have their own unified color attire to then transforming into each other as they moved behind and through a series of magic (video) screens 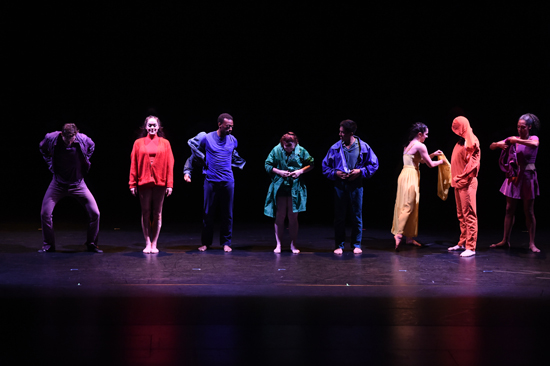