To commemorate this anniversary, t 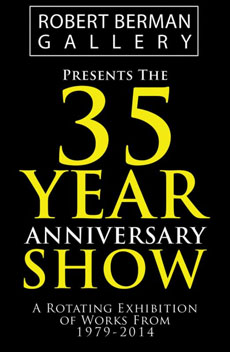 he gallery will be exhibiting throughout the fall a four month, rotating sampling of artists and artworks which it has presented at one of its seven different locations, throughout its 35 years in business in Santa Monica.

From the gallery’s first solo artist exhibition with local artist Zox in 1979, through to its most recent summer 2014 exhibition of photographer Murray Garrett, the ROBERT BERMAN GALLERY will be presenting samplings of some very well known artists such as: Keith Haring, Raymond Pettibon, Cameron Jamie, Daniel Joseph Martinez, Bill Barminski, Alex Prager and Shepard Fairey.

Starting in the 1980’s, ROBERT BERMAN GALLERY was one of the first galleries in Los Angeles to exhibit, in mass, Chicano street artists and muralists. Presently exhibiting with the gallery and a featured artist in the 35 Year Anniversary Exhibition is chicano muralist and painter John Valadez. Valadez will also be the premier artist for our January 2015 exhibition.

As a focus on the 1990’s, ROBERT BERMAN GALLERY will also feature a sampling from its three seminal shows: Man Ray : Paris – LA, Concrete and Buckshot : The Works of William S. Burroughs, George Herms: Beat Bar, all of which were presented in conjunction with Track 16 Gallery. 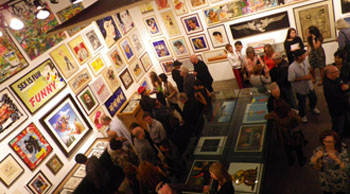