December is upon us. There is still time to get that perfect present for your loved one. Give the gift of art this season. Head to Skidmore Contemporary Art (D-2) for it’s holiday exhibition. “Gallery Artists” celebrates the talented gallery artists and will run through December 31st. 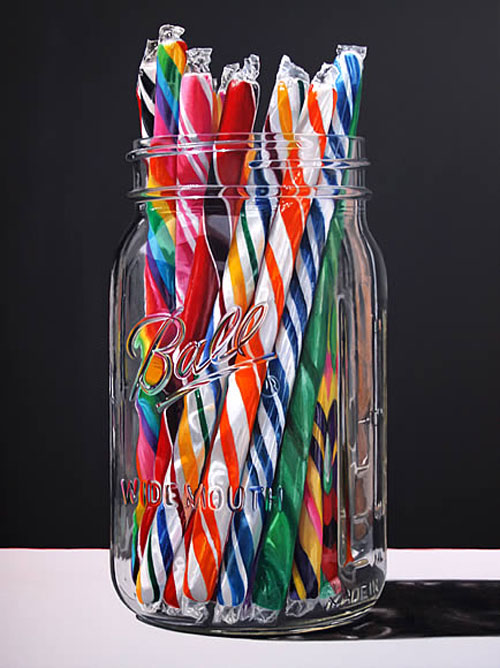 Info from the artist (Daryl Gortner): Humble but visually striking things inspire my photorealist paintings. Some of the objects that fascinate me are brightly colored coffee cups, lollipops wrapped in cellophane, a gumball machine, patent leather high heels, salt and pepper shakers, and marbles in a mason jar. I celebrate the extraordinary beauty of the ordinary objects in our everyday lives.

I am especially drawn to objects that both have intense color and offer the opportunity to paint reflections. Glass, metal, patent leather and plastic present fascinating mirrors of things around them. I get almost as much pleasure painting the ephemeral world of reflections as painting the still life objects themselves. If you look very carefully, you can almost see me in them.

In the paintings I enlarge the object many times beyond actual size so that you can lose yourself in a gumball, or the shine on the heel of a shoe. Because of the amount of detail in my work, a single painting can take up to a month. Art is a universal way to communicate. It is the way I communicate with the world. – Daryl Gortner.

The staff at LA Art Party loves the work of Eric Nash…see an Artillery Magazine article featuring an interview that Kathy Leonardo did with the artist. 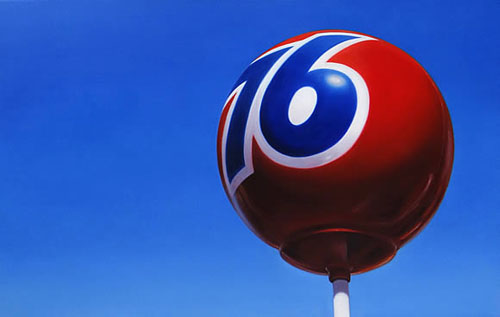 As The West and Los Angeles emerge as America’s new art center, it has consistently attracted some of the freshest artists of the last few decades. One of those is Eric Nash. Nash counts Hollywood celebrities and art lovers worldwide as collectors including Ellen DeGeneres, Portia de Rossi, Jerry Bruckheimer, Orlando Bloom, Mena Suvari, Hillary Duff, Alexandra Balahoutis, Hollywood style-makers Adam Blackman and David Cruz of Blackman Cruz as well as directors, producers and entertainment attorneys. He has private collectors in New York, Chicago, Seattle, Portland, Vancouver, San Francisco, Los Angeles and Europe. Eric’s iconic images have struck a cord. In fact, in 2009, In fact, Nash’s work was the only art stolen by Hollywood’s notorious “Bling Ring”. He has had multiple sold out solo shows in LA and Palm Springs since 2005.

Also on view is the work of Tracey Sylvester Harris… Enjoy a dazzling vision of California that merges the past with the present. In an ironic twist, two recurring themes are her love of water and her love of Hollywood. The series of paintings entitled Lost Holiday are inspired by found, black and white photos from the forties and fifties. 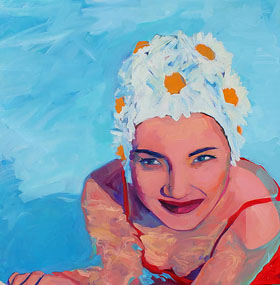 The paintings transform long forgotten memories into vibrant light and color. Although bright, the paintings are bittersweet in their depictions of fleeting moments of summer captured almost a lifetime ago. In the Noir series, she experiments with imagery from films made in that same time period. These paintings depict women mostly as torsos, or cropped stills. Suspended in time, they have been captured smoking, waking, sleeping, and sitting in contemplation. With the context of their actions removed, the women become mysterious. Dressed in swimsuits or lingerie, they are alluring not for their bodies, but the secrets they hold. Looking closely at the paintings however, reveals her true theme- how precious and fleeting our moments in the sun are.

Nina Jun is a Korean-born sculptor and installation artist who moved to the United States in her early 20s. Her work is also included in the December show. After being comfortably settled in her American life, Nina realized that the true American dream is to challenge yourself in what talent and capacity you have and continue to explore yourself. When her daughter turned 3 years old, Nina resumed art school–which she did not finish in Korea.

ngraduate school, she studied multiple disciplines: figurative sculptures, bronze casting, ceramic and video art. For her MFA show, Nina showed her first dome shape sculptures covered with ceramic shards in installation with video monitors and projections. Since then, the dome shape (a form of typical Korean grave) has been recurring in her installations.

While Nina was working as an exhibiting artist, she served as a director for a non-profit art gallery in Los Angeles area for 4 years (2004–08). She helped emerging artists show their experimental, alternative and contemporary arts.