Here’s some more info about the artist from the gallery: Artist Richard Baker was born in Baltimore, MD. He studied painting at the University of Pennsylvania as a student of the renowned realist painter Rackstraw Downes. After college, he combined my interests in art and music with a business degree and became a successful television and film producer as well as a talent manager representing such stars as Tim Allen and Drew Carey. 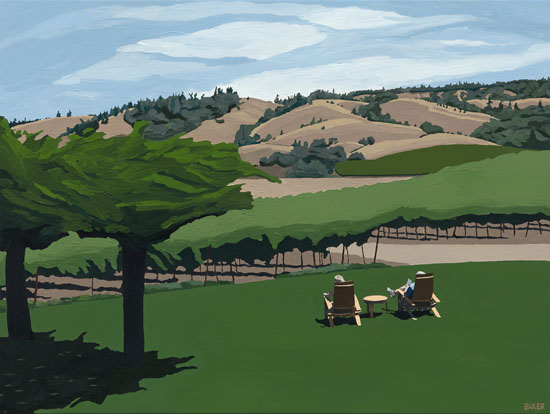 Past producing credits include “The Drew Carey Show” and the “Santa Clause” trilogy of movies. He continues to manage Tim Allen and currently is an executive producer of Tim’s ABC sitcom “Last Man Standing.” About four years ago, he decided to pare down his entertainment business and carve out more time to pursue his lifelong interest in painting. During that time, he has been featured in two solo gallery shows (Melissa Morgan Fine Art, Skidmore Contemporary Art), and a number of group shows at those galleries. He was featured at the 2016 Palm Springs Art Fair.