Save the date….Sunday, March 9th, Upper West Restaurant celebrates the work of Vicki McClay with an artist reception from 4:00 pm to 7:00 pm. 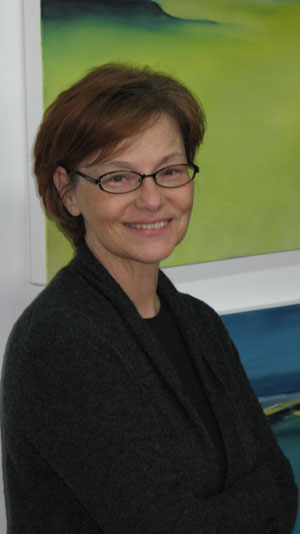 riginally from Minneapolis where she first began her art career, McClay has lived in New York City and finally landed in Santa Monica. She was first inspired to paint by her single mother who gave McClay her very first set of oil paints.

As with most artists, McClay was also inspired by a mentor, who influenced her work early on in. “Lorna Ritz was an Artist in Residence at the University of Minnesota when I attended school there and she helped me see color and spatial relationships in a new way,” recalls McClay. “My work was very dense, perhaps a bit chaotic, and she suggested that ‘less is more.’ That approach still works for me today. I started to open up my use of the space on a canvas and bring subtle changes to the color fields. That was when I began layering my application of color, which I feel produces the nuance, the depth and the luminosity that exist in the paintings.”

Curator Gino Paino of Art Vault helps organize many of the exhibits at Upper West. He runs a small gallery at the Shore Hotel and works with emerging artists. When asked what he looks for in an artist, he replied….”Generally, size of their Body of work is extremely important to me, an Artist should have at least 20 to 30 pieces to show, at any given time, sufficient amount so a Curator can infer his or hers tendencies. I like to know where are they coming from and where are they going with their work, what is that they are trying to accomplished and what is that they like. This are elements that inform me of their ‘Story,’ something that makes them unique, a story that justifies the excitement that attracted me to their work and consequently will attract other art aficionados as well.

McClay was introduced to the owner of Upper West via another artist, her friend Imelda Healey, who recently had a show at the restaurant. She talks about what she will be showing, “I feel that the horizon has been my muse throughout my artistic life and these painting are about that shifting line in front of us, the place we are headed, like a bridge to the unknown.”

Clay generally works with oils. She explains, “I prefer to work with oils because they afford me the blending properties I utilize in the work. Oil paints are slow to dry which allows for the layering quality I seek in the pieces. Oil also offers light and distinct color qualities I feel are at the heart of the paintings, qualities I have never been able to achieve with any other medium.”

The opening reception will be held on Sunday, March 9th from 4:00pm to 7:00 pm at Upper West located at 3321 Pico Blvd. in Santa Monica. http://www.theupperwest.com/ http://vickimcclay.com/  http://www.art-vault.com