Skip to content
Save the Date…Sept 12, the Fine Art Film Festival is Back at Beyond Baroque!

historic Beyond Baroque Theater in Venice, California, is the host for the Fine Arts Film Festival, on Saturday, September 12, 2015.

Twenty films from around the world will screen from 11 a.m. to 6 p.m. with a screening of the Best Feature Narrative Film and the red carpet Awards Gala starting at 7 p.m.

A very late entry, Other People’s Children is premiering for the first time in L.A. It is a narrative shot in the galleries, studios, streets and alleyways of downtown Los Angeles. Featuring Chad Michael Murray and Diane Marshall-Green this Official Selection is the feature debut of award-winning director Liz Hinlein. 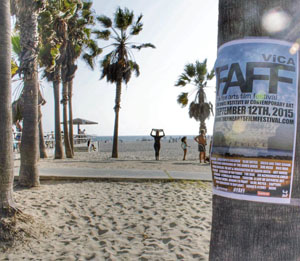 “We expect this festival will amaze audiences and draw a wide, intelligent and fun crowd from both the film and art world.” said Juri Koll, director of the Venice Institute of Contemporary Art.
Koll successfully screened his own film “Lisa Adams: As It Appears to Be, ” at the Crest Theater in June 2014 and began planning a film festival about the art world through ViCA. Shortly thereafter, he met Lynn Holley, a curator, consultant, and writer, through curator and critic Peter Frank. Lynn premiered the first FAFF in Santa Barbara in 2010.